The people I ride with fit most of the standard archetypes; the mechanically inclined one, the quiet introspective one, the over-thinker, the young pretender, the party animal and, of course, the team idiot*

Fab friends to a man, but lacking in just a couple of areas. One being medical diagnosis of damaged organs** especially if the patient has a history of whinging, a low pain threshold and hypochondria. Last year a finger bone snappedby the slamming van door was dismissed as a bit of swelling, and this time round the same limb going all sorts of funny colours matched a confident identification of ‘mildly bruised palm‘

To be fair, one member of the medical committee was already dealing with a separated AC should joint with far less histrionics than yours truly visually explaining the pain through the accepted medium of the chicken dance*** Another member was absent due to cracking a couple of ribs half an hour earlier, so mitigating circumstances abounded.

Even so, it bloody hurt. One crash all week. Third day, but more irritatingly with three days to go. Ironically – and to show that fate has no truck withbraggadocio and bombast – only 24 hours before I’d had mybest day on the bike for a very long time. Even my friends noticed ennobling a singularity of thought that maybe I could ride a bike after all. I blame the altitude. And the wine.

Fast forward to 11am. First of six trails all uplift accessed. Couldn’t have been more excited. Couldn’t haven’t ridden any worse. Some bastard skill stealer had crept into the room the previous eveand nicked my hard won capability from a drunken mind. I mean it’s not much capability, but I’ve worked hard for that soto have it snatched away so cruelly seems more than a little unfair.

Second uplift. A little better, a wide ribbon of rock refreshingly attached to immovable geology. Not too many corners. Pretty much point awesome bike somewhere near the fast fellas and enjoy the view. Third trail, back to being shit. Had a look for somewhere to have a big crash, but survived due to insane amounts of grip and very good brakes.

Then Adam flung himself heroically, if somewhat hastily, at a plethora of rocks which broke both his fall and a couple of ribs. Fair to say his stoicism was entirely at odds to my post crash trauma, but hey he’s a young man with some organic body armour.

Next up was ‘Janet Street Porter‘ – nominatively deterministic for a rocks raised atright angles in the manner of gravestones. Every one of which had my name on it. I would say vertical but that’d ignore the canting of the horizon as is normal with any trail hanging onto a steep gradient.

Arrived at the first hairpin barely in control and in not state to rollthe modulate/grab dice needed to maintain any kind of progress. Foot down, some swearing and then away on a fading incline loosening death grips and reducing the background load of managing fear.

‘We’ll be back up there on the next run‘ Matt the guide declared. Four looked happy, one looked broken, one was just looking at the ground. Still easier when you know what’s coming eh?

Not the hardest trail we rode by a distance. No exposure. Steep but nowhere near peak‘fuck me, ride down that?‘ territory. Rocky sure, but we’ve been at that for three days. Switchbacks, yeah but by the end of the week we’ll have ridden hundreds of those. Sometimes on a single trail.

Still nervous tho. Best to follow someone who knows what they’re doing. In a little faster from the village above and it’s gets noisy fast with rock abrasions to expensive components, clattering suspension, tyres fighting for traction and the occasional whimper.

A little more in control this time tho. Slightly less flustered as the crux move came into view. Arse so far off the back it’s almost in another country. Squeezing those four pots like a man testing a dodgy tomato, big head turn, bike articulated between a hard turned front and a straight rear. One gap between the rock teeth, got to loose the brakes now, got to go for it. 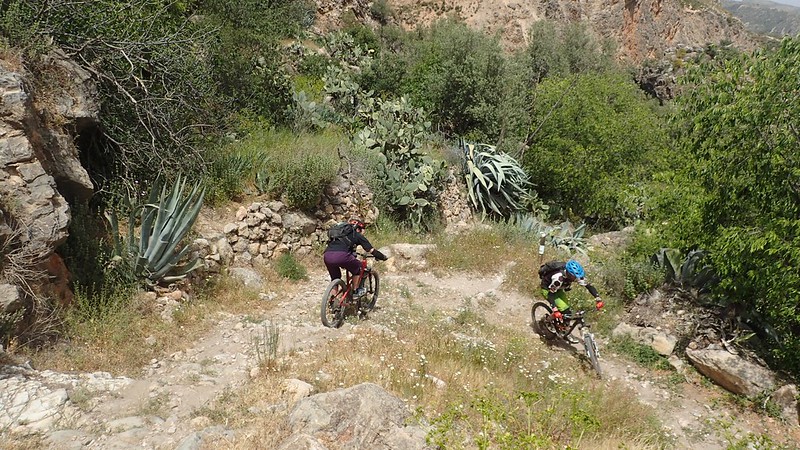 Oh that feels good. Even better there’s a lensman above doing his stuff. This is going to look epic. Next switchback is so much easier and I’m chasing a line nicked from Haydn’s way better effort last time round. Mind is clear, bike feels great, I feel good, hit the exit and let it all hang out.

Except I never got to the exit. Not sure I even made the entry. No idea what happened really other than an unscheduled appointment with some unforgiving terrain. Lay there for a bit wondering which bit hurt most. Quite a few limbs demanding priority.

After hauling myself back to my feet, I decided it was my hand that might have suffered rather more heavily. Even a 600mg ‘Donkey Stunner’Ibuprofen generic only took the edge off it. As did more of the same, wrist supports and a medically inadvisable alcohol bombardment over the next three days.

I expected it’d be fine when I stop riding. It wasn’t tho and a trip to Ross A&E – where the radiographer remembered me from last time – showed a hairline crack in the metacarpal. It didn’t show the soft tissue damage which, over two weeks later, is still bloody painful. I’m not making a big thing of it tho.

Didn’t stop me riding. Probably should have. But it’s bluebell time. I’d have to be in tractionto stop me goingout right now. I mean that’d just be stupid.

*I feel regular readers will be in no doubt of the identity of the latter.

**except the liver. And to be fair, we’ve all put the hours of research into that one.