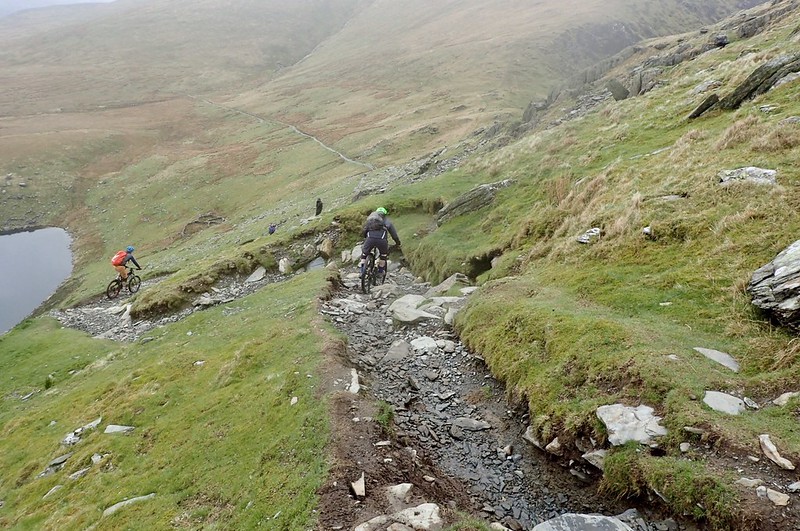 .. Butterflies flap their pretty wings in Guatemala triggeringtyphoons sweeping inland destroying great tracts of South East Asia. That’s the executive summary for chaos theory. And while the worthy focus on the headlines, those of us sharing our riding tribe with Rex ‘The destruction of Sodom and Gomorrah‘*’ James are far more interested in the local derivative.

Less fire and brimstone and – if one is still stretching for biblicalallegory – more paired animals, arks and Russel Crowe in an unconvincing beard. What we’re talking about here is Rex picking a weekend to go riding anywhere,and regardless of the prevailing weather conditions a small but angry weather system attempts to drown whatever vehicle he is travelling in or on.

Spring felt pretty entrenched until the 5:45am call of my alarm fought for audible hegemony againstthe water cannon smashing against the darkened windows. 30 minutes later, the van headlights cut through slashing rain with thefour of us sheltered insidewondering at what height water turns to snow.

Snowdonia you see. A land not so much shaped by the people as a people shaped by a land proudly wearing its geology on the outside. Inland seas of the Jurassic age now rising a thousand metres above sea level, their craggy faces carved by the ice and the wind. And the rain. Which sprinted down the flanks of ever steepening hillsides as we pushed through endless low pressure fronts.

Thanks Rex. MWIS forecast called for 8/8ths cloud cover and a degree above freezing on the summit of Snowdon which explained the bulging bags of waterproof kit in the back. What I really wanted was a dingy or maybe a Navy frigate, but had to be satisfied with rainproofeverything and a bike shod with those chubby tyres the Internet proclaims wouldexplode** with first contact of a spiky rock. 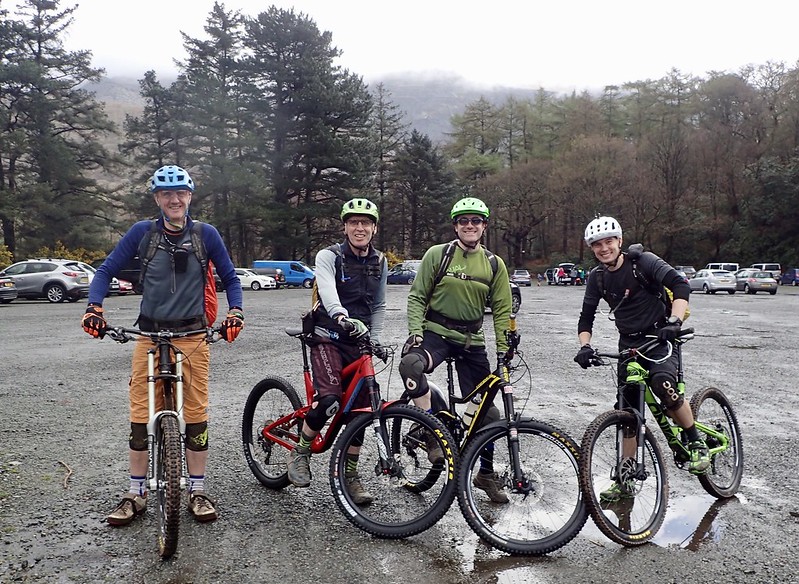 Car park was wet from below but dry above. Even a spot of blue we assumed was Fates’ satnav desperate to locate Rex and recreate that inland sea about his person. We scooted off before it noticed on a road climb that just had bastard written all over it. 150m of ascent in about 150m of tarmac. It should come with it’s own funicular. 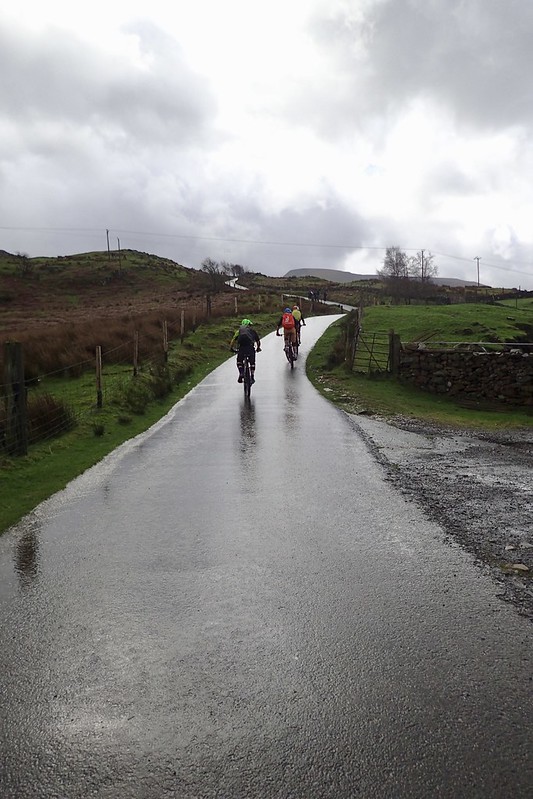 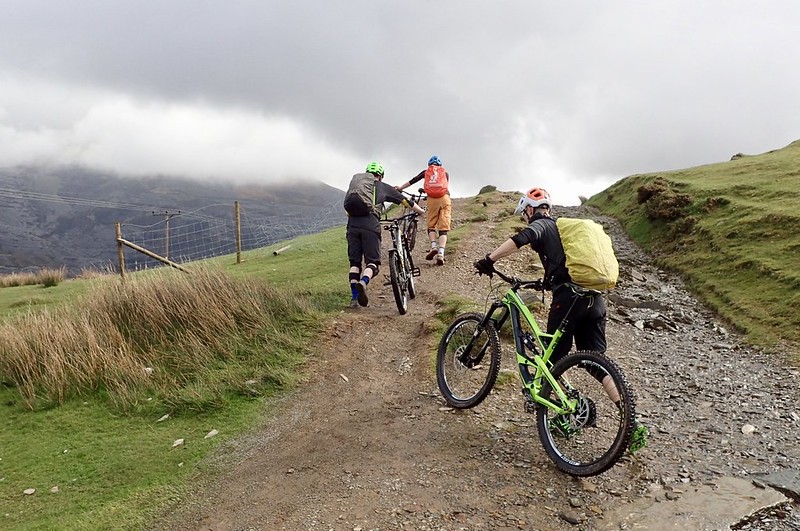 That’s the railway we followed on the walkers path out of Llanberis. Push and carry at the bottom, then ride a bit overtaking almost everyone mostly dressed for a day at the beach/a night out in Newcastle. Halfway up in 45 minutes and therain hadn’t found us yet, but the cloud clamped the summit lost another half a kilometre into the sky. Best get on with it then. 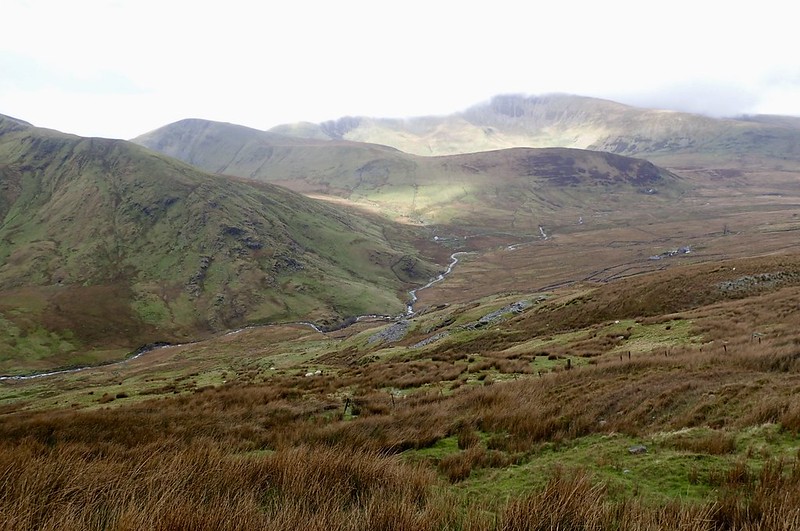 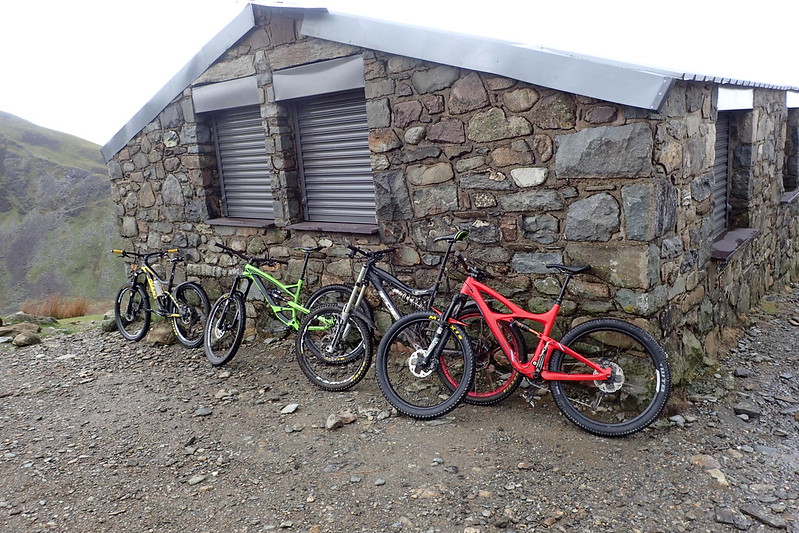 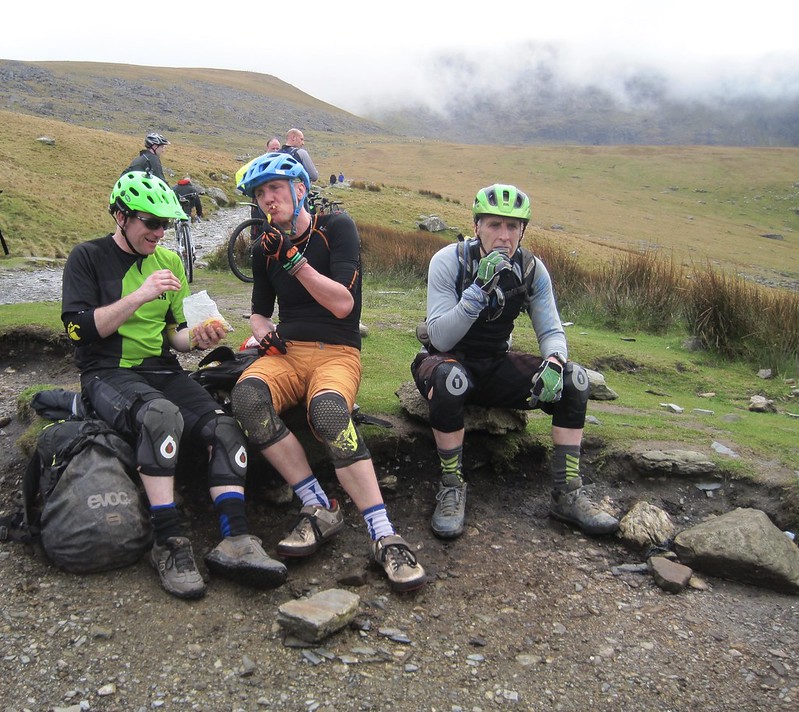 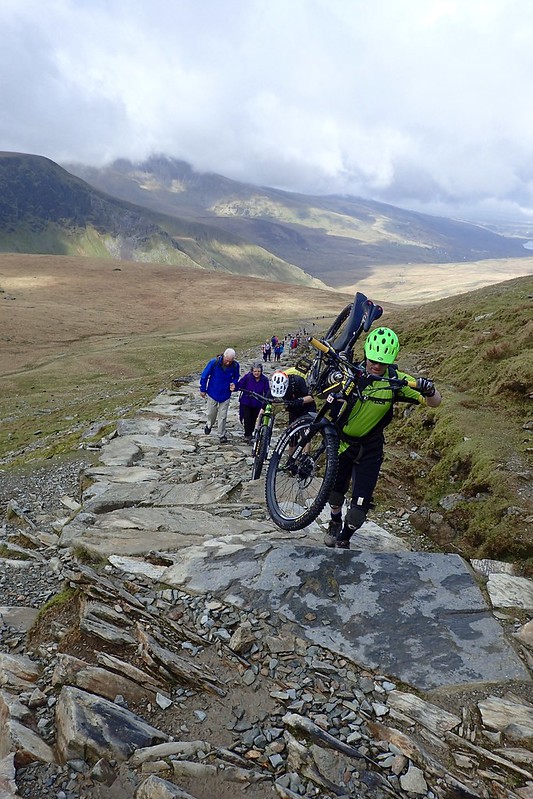 Ride some more. Be polite. Be polite but a bit more noisily. Then we’re off and it’s a tough push/carry through the cloud base which blissfully hid the gradient of the last big pitch. That was a calf stretcher but at least it kept us warm. Stepping up to the freezing summit has us mingling with a mass of random perambulation. The view was all the way to the end of your arm, soI cannot imagine what’d it be like on a sunny day. More people? Ugh. 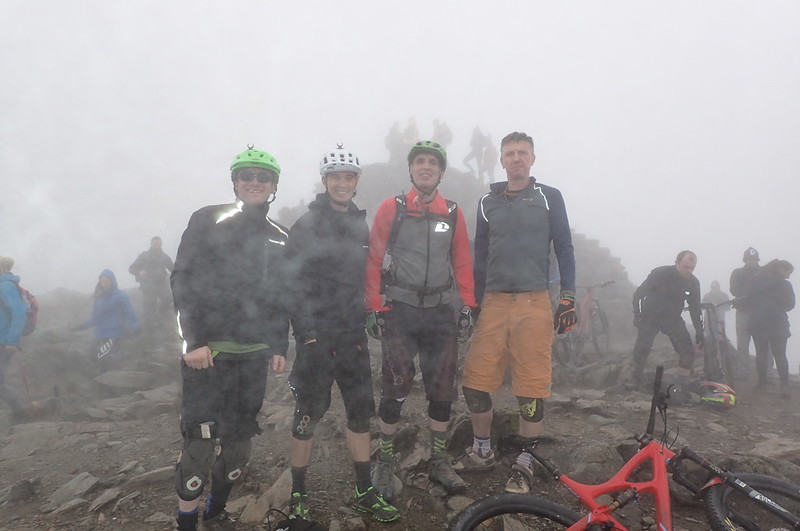 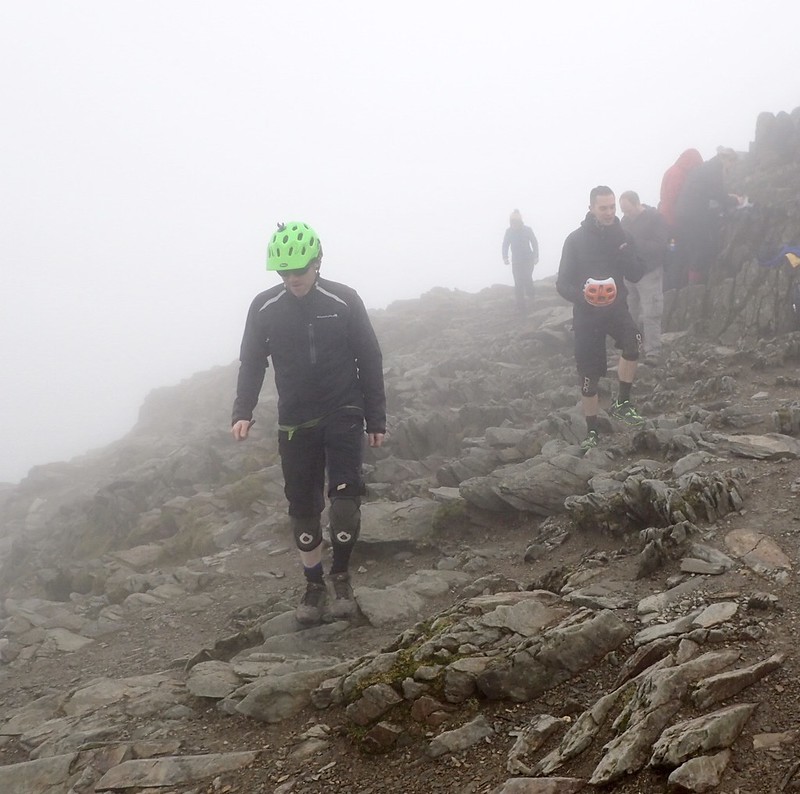 We didn’t tarry. Carried back down the steps so not to trigger an international diplomatic incident with the hoards trudging upwards. Got a bit lost, got very cold, got the phone out, located the ranger path and for the first time in two hours revelled to the sound of the freewheel. 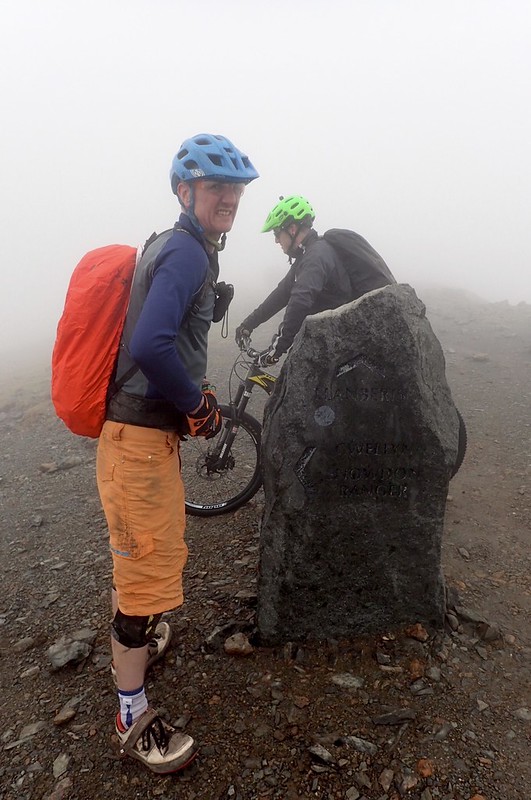 Climbing 900 metres without a break has its rewards. Mostly losing three quarters of that snaking down the other side of the mountain. What a descent this is, wide open and fast on the ridge but with enough technicality to demand all of your attention. Which doesn’t leave much spare when it plunges towards the lake on a broken stream-bed tossing up massive rocks at all sorts of exciting angles. 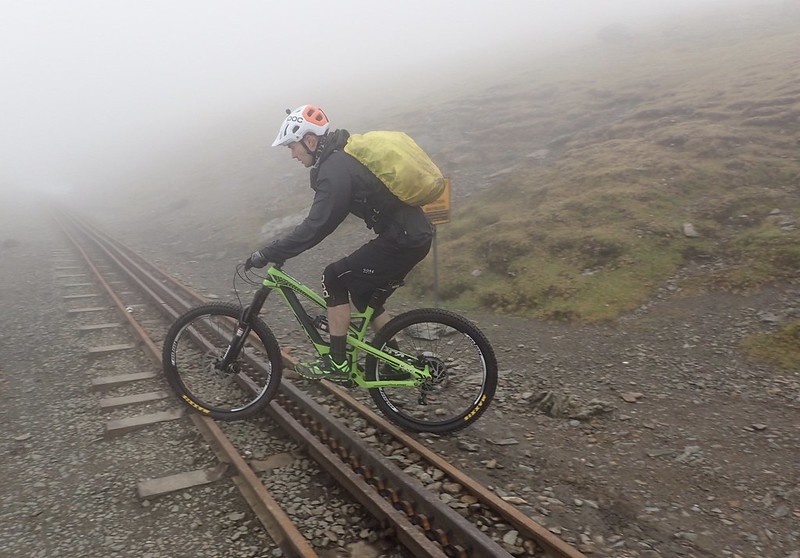 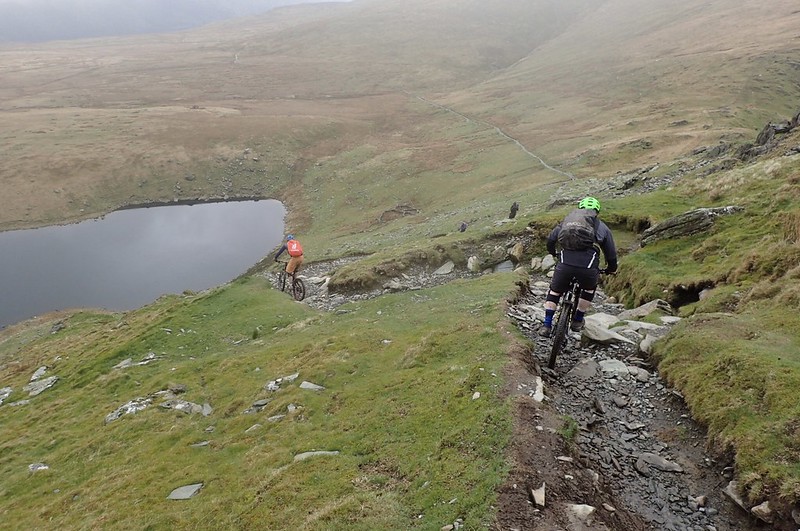 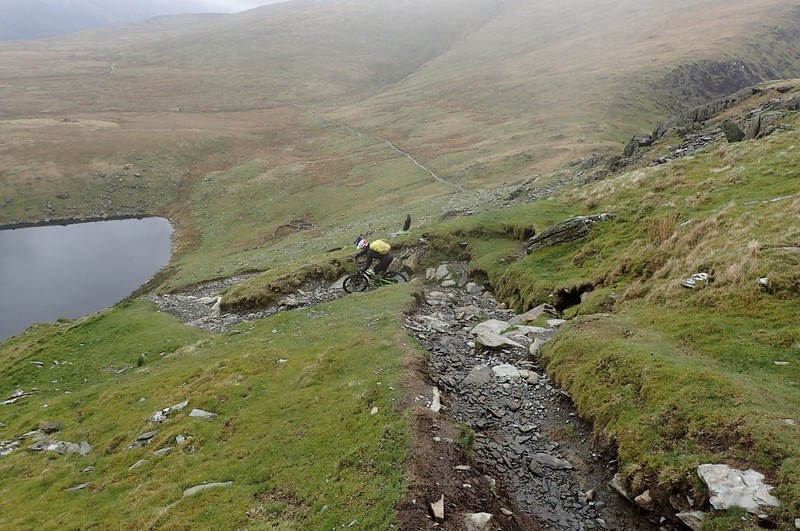 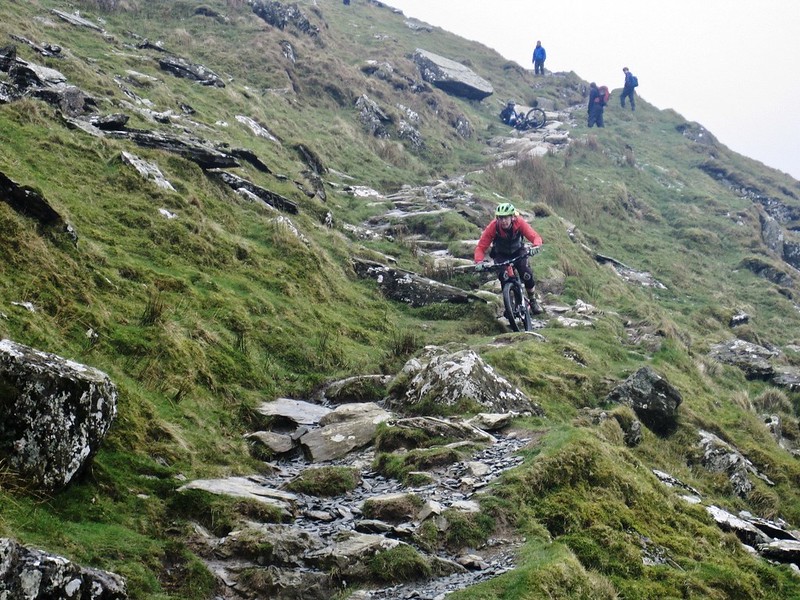 I didn’t ride it all. Some sections piled up behind my eyeballs suggesting any attempt to use a bike to clear them would inevitably end with a vital internal organ pierced by a murderous rock spike. I glancedat Rex and we exchanged a look suggesting both of us didn’t really know what the spleen was for, but it was probably something any right thinking person would want to keep on the inside.

No matter, it was descending 650m of glorious madness. I’ve spent ten years writing about riding and I still cannot explain what that feels like. But for self conscious repressed Englishman to risk a fist pump, it must be something quite extraordinary.

With it being North Wales, what followed was a soggy slog up a vertical grassy slop over a saddle to access Telegraph Valley. ‘Bit Rubbish this‘ says Matt who’d last been here many years ago. Fair to say it’s eroded a bit and was now bloody marvellous – a ribbon of singletrack clinging to the hillside throwing up massive water-bars every few hundred metres. 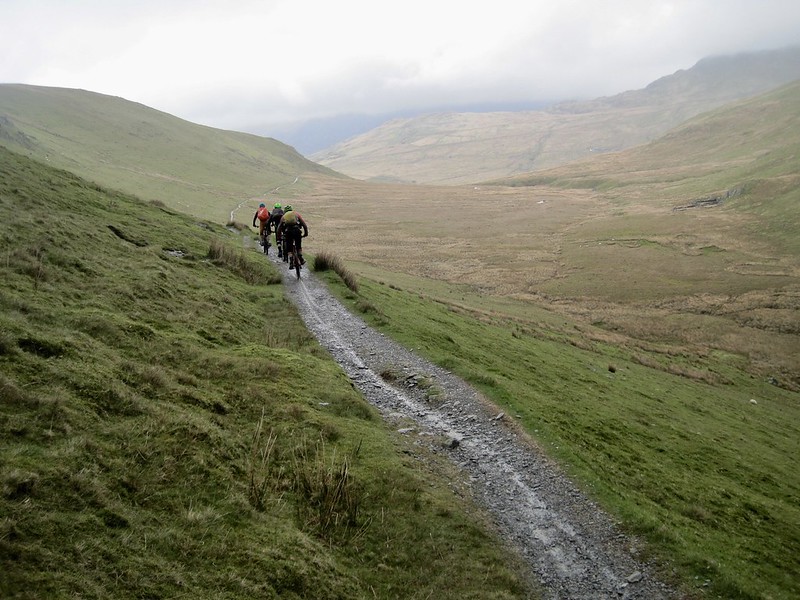 Or tabletops as they became. Chuckingoneself into a breathtaking beautiful ruggedlandscape whiletraining endless compress-fly-land-accelerate with your mates is there or thereabouts the most fun you can have while standing up with your clothes on.

Mountain biking. The clue is in the name. No sane person should deny themselves mountains and bikes and best friends.

It didn’t even rain. Not that we would have cared.

*I’m fairly firm in my opinion that religious texts arebasically someone writing down the best story of the day. But this is in the old testament, Genesis, Quran, Hebrewbible, Hadith and thedeuterocanonical bookswhich makes me think it must have been a bloody good story.

** as a group we had many punctures that weekend? Me, not one. I was impossibly smug.