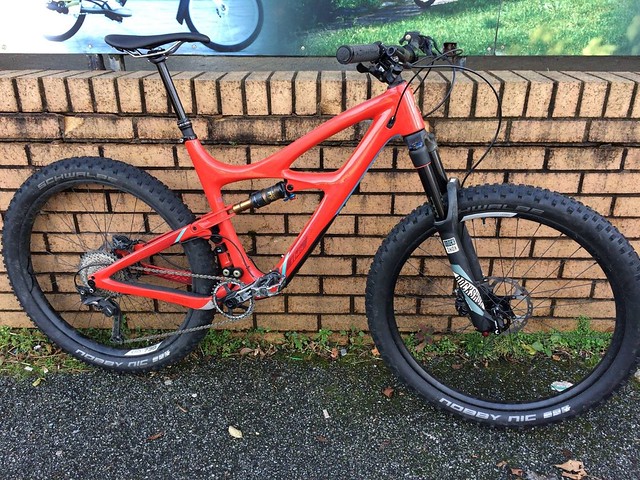 Gather round, gather round, there’s a story to tell here. I say story, others may label it a web of deceit spun around some hooky rationale on exactly why yet another bike is soon to enter the ShedOfDreams. A rationale lampooned by Carol – my long suffering wife and the brains of the outfit – who entirely accurately decomposed it to the simple fact it’s been six months since I last had one.

Let’s move on. Instead consider this as the poster boy for intellectual rigour and logical exactitude. Please stop laughing at the back. Firstly we must consider the on-boarding protocol simply expressed as ‘one in, one out‘. An early win with Jessie’s undersized Turner leaving the shed earlier this week. What’s that? Not one of my bikes? Detention for you; no one – and certainly not me – ever specified which bike was to be ejected to make space on the wall. It’s not like I’ll buy Jess another one, as she’s only a couple of inches shorter than me* so can ride one of the carefully selected wheeled artefacts which make up what even I laughingly refer to as my bike purchasing strategy.

Intellectual Rigour remember? When options are varied and the outcome is unclear, the wise cover all bases. That’s me then with aluminium, steel and now carbon fully represented. Not satisfied with such a shallow reconciliation of the many standards, I now have full access to wheel sizes starting at 27.5 finishing at 29+ passing through 27.5+ and 29 on the way. On just the three bikes. That’s beyondintellectual rigour, it’sedging into borderline genius.

So we’ve established logical and rigour, let’s get down to specifics. That ^^ is an Ibis Mojo 3 created from the fusion of string and glue. I’ve never had a carbon bike mostly because they cost shit loads, and I’m a klutz who can break almost anything mostly by just looking at it.

What’s changed? Not much other than an ill conceived idea that my 50th birthday should somehow bring forth the perfect bike. Nonsense of course as no such thing exists and even if it did, the chances of my random purchasing strategy intersecting with it are as close to zero as to make no difference. Thisdidn’t stop me compiling a spreadsheet with twenty or so vanity trinkets represented all at eye watering prices.

Last night I had an entirely sober ‘Fuck this‘ moment. There’s no amount of enjoyment that is going to make something that expensive anything other than a disappointment. So much of the joy of riding has nothing to do with riding and even less to do with the bike you happen to be astride at the time. Spending that much money in search of a tepid marketeteers dream is beyond dumb and accelerating towards insanity. And that’s me saying that.

What do I know? Not much other than I love having different bikes to ride. It’s not going to make me a better rider but the bag is empty and the cat haslong gone forthat aspiration. What else? However much I pretend to eek out the zeitgeist of a 160mm Enduro special, really I’m not kidding anyone. I’m as fast – and let’s be clear that’s not fast at all – on the 120mm Cotic and I’m having a shit load more fun. Where those bikes become brilliant, I’m far too bloody terrified to be even peripherally involved.

So the Ibis then. Amusingly niche even for me. 27.5 and 27.5+ but no 29. That’s fine I bought a bike not long ago which is entirely bi-curious withthose wheel sizes. Carbon as we’ve established, proper light, a bit more travel than the Cotic but not Enduro slack or amped out on a super long fork. By all accounts it’s an amazing bike but that’s not why I bought it.

I’ve owned many amazing bikes. I’ve watched them being amazing when ridden by others. There is no perfect bike for me because every ride I wake up with a different idea of what perfection might look like. I’ll never get there- but mayedgea little closer if I amhonest about the parameters.

That’s an ex-demo. It’s last years model. It’s half the price of a new one. If I don’t like it, I’ll move it on with little financial loss nor emotional trauma that it wasn’t the one.

This was never about the perfect bike. I get that now. It’s about the fun finding out all the ones that aren’t.

*with about the same inside leg. This speaks more of my dwarf like stature south of the hips than Jessie’s anatomically correct bearing 😉

2 thoughts on “You can’t get there from here”