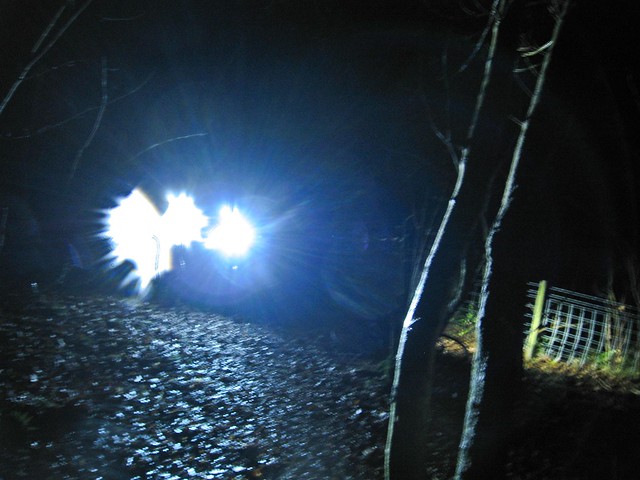 I always loved Anne Widdicome* for describing then Tory leadership hopeful Michael Howard as â€˜having something of the night about himâ€™. Thatâ€™s us – right now – facing down thesliding sun benighting ourWednesday night ridesfor the next six months.

For those of us into double digit four season campaigns, the search for motivation to shift sofa-based arse to the trails, the need for a substantial trust funds to procure multiple drivetrains and the skills to be relearned when everything is going sideways become ever harder as the trailssoften.

Lights though, they are bloody brilliant. Iâ€™ve invested sufficient funds to shoe the kids for about a hundred years to procurea UK made CNC bean canister projecting light into the next county, and possibly bringing down aircraft heading for Birmingham International. Instructions showcase twelve modes, trumpet gyroscopic circuitry and acceleration based beam patterns.

Being a mechanical savage I stabbed buttons until â€˜Bark-Fireâ€™ was initiated. Mostly accompanied by a Picard-like â€˜Make It Soâ€™. Lights set to stunning, daylight upfrontand not much dimmed in the periphery, with an equally awesome helmet light filling the gaps. Basically, what weâ€™re talking here is a night-sun. Nothing other than your daylight saving meme stops you from ripping the trails at full speed. Well until the water table becomes a physical obstacle.

It was not always like this. Back in the 90s, a burgeoning sport brought forth many men labouring long and hard in sheds up and down the land. Begetting a cut down car battery powering two bar mounted candles giving off a waxy glow for between 90 minutes and about 12. The excitement was never knowing quite which duration would be your companion in the darkness this evening. Lights essentially moulded from discarded fairy liquid bottles were inadequately affixed to narrow bars with ubiquitous zip ties.

Not the greatest solution. On any kind of non-tarmacâ€™d terrain, the lights would slowly – but terrifyingly – rotate 180 degrees to silhouette your frozenfeatures as you smashed into a handy tree. At least you were travelling slowly, but a couple of hours of this had us shaking our pints onto copper-burnished pub tables narrating to any who would listen â€˜you donâ€™t know man, you werenâ€™t thereâ€™. Technology marches on and soon we were affixing an approximation of a 1950s Cadillac fin to our bars where HID technology would lightthe trail in a rather lovely blue, assuming the massive voltage required to startit hadnâ€™t set fire to the local forest.

And now? Now we have a plethora, a smorgasbord, a thousand options from very low cost Chinese imports to upscaled UK sheds from my youth. Andwhile Iâ€™m all for the lowering of the barrier of entry for night riding, some of these eBay bargains lack any kind of safety features whatsoever. Which, when youâ€™re stuffing volts and amps into a live medium is something more than a cursory oversight.Imay not be yourfirst point of call for fiscal responsibility, but even I can see that if youâ€™re standing in the charred ruins of your house, while being doused by the fire brigade, the£100 saving on a set of cheap lights may be a decision on which you reflect long and hard upon.

Anywaywe strap brightlights to bars and fading motivation to bodies andhead out into the dark. One of the reasons to do so is the Wednesday night ride is essentially the gap between being clean and being drunk. Itâ€™s made all the better by the relentless piss-taking and giggling which accompanies every single one, even whenweâ€™re him deep in icy puddles or slashed by hard rain.

Any conversations bypass the hi-brow directly toreboot â€˜Beavis and Butthead go Mountain Bikingâ€™. It can be a little cutting and it is always rude – I tend to abuse my riding pals on everything from ridiculous lighting solutions to stretched riding shirts apparently â€˜smuggling a badgerâ€™. They respond appropriately asking if maybe I could go a little faster as brake pads are quite expensive.

Jim** tho is a special case. He expresses his true feelings through the interpretive medium of modern crashing. Heâ€™s fast and fearless. Even after finding himself dangling from a tree some distancefrom wherehis bike is crashing through the undergrowth. A contributory factor is his lighting solution clearly acquired from a garage promotion where 20 quid of petrol unlocked the possibility of a light-set best thought of as toaster with a bar mount. They have – in no particular order – failed to light at all, fallen off the bars, rotated round to blind Jim – a blessing really as he was about to insert an 100 year oak into his personal geography – and randomly flipped through a Fibonacci set of modes none of which appear to light the ground in front of him

Being a good sport, Jim – a chef by day – explained this illuminating phenomenon was not a toaster at all. Weâ€™d entirely misinterpreted his wise and carefully researched purchase. â€˜Thisâ€™ – he proudly intoned indicating the plastic-by-the-lowest-cost-bidder on his bars – â€˜is a superb, value engineered off road lighting system. With a crumpet settingâ€™. Before we went full dark, rides have been light-amibivalent starting in the day, fadinginto dusk before disappearinginto full black. Riding in the twilight is horrible, hard to know if to trust your lights or your aged eyeballs. Riders pirouetting into the local shrubbery – Iâ€™m looking at you Ian B – suggests decisions were not always well made.

Jim tho, heâ€™s not a man to waste electrons. Turns his lights on only when hands and faces cannot be visibly confirmed. The last descent on an early autumn ride finds us high above the vans with a brilliant kilometre of buff singletrack to carve through. Itâ€™s proper dark tho, and weâ€™re all attaching cables and tweaking the angle of dangle. Cutting through thisfaff came the buzz of over-driven LEDs arcing into the forest canopy. Jim has lined up various batteries in series and brazenly selected a Spinal Tap-11 setting.

A voice broke the respectful and awed silence. And this is what we heardâ€˜Heâ€™s only gone FULL CRUMPETâ€™. Cue riders falling off bikes in paralysed amusement. You probably had to be there. And you should because this is the essence of the Wednesday night ride. I aways come back with a massive grin and still find myself chortling the following day when others demand a thin veneer of professionalism. The is somewhat beyond me because while my body is synchronised to a boring day, my mind is still lost in the night.

And however shit it gets – and it will get shit – weâ€™ll just keep doing it because itâ€™s stupid, itâ€™s silly and itâ€™s not sitting on the sofa getting fat.

As a reward there is always beer to toast the ride. Or possibly a crumpet.

*in purely a literal sense.

**this is a man who turned up for the night ride one day TWENTY FOUR HOURS after his wife had given birth to their second child. Respect is due.