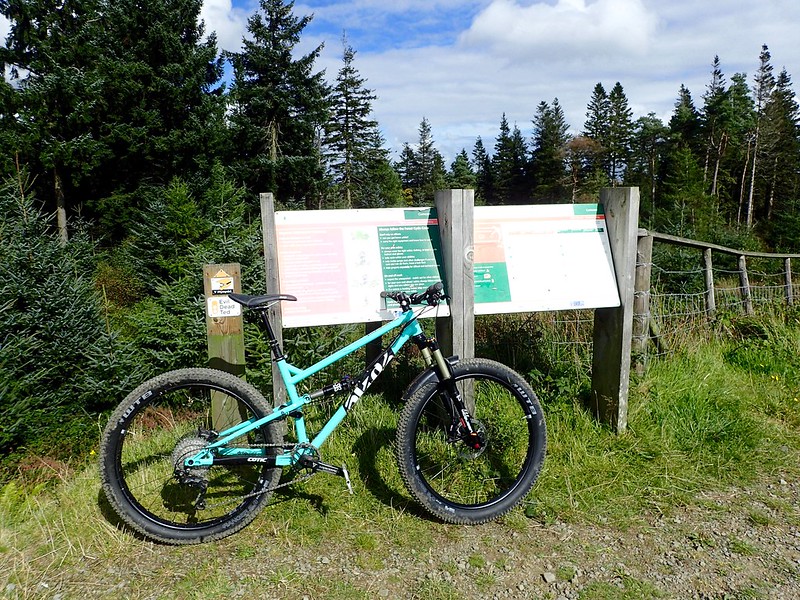 This time next week, six friends and I will relocate to the stunning beauty of the Ardeche in southern France. I fully expect there to be epic riding and even more epic hangovers if last year is to provide any kind of baseline.

Then I took the perfect bike even if the rider was at no times perfect. In reality my capability swung randomly from borderline competent to broken man with much mincing, excuses and lying down in massive rock gardens running a full diagnostic check in between.

The bike tho – long, low, slack, superb long travel fork, clever shock, stiff wheels, sticky tyres and dropper post. It’s a full house at the Enduro Bingo. With 4000 km under wheel, we should share the empathy of the Lone Ranger and Silver, Bernie Winters and Schnorbitz or possibly Sonny and Skippy* – except Skippy tended to bring Sonny problems, while the Aeris is really good at solving them.

Well it would be were it not be for my inability to let it strut its stuff. It’s reasonable to expect after all this time together, we’ll laughably dispatch any obstacle demanding full commitment, a modicum of skill and a bloody good bike. One out of three isn’t bad. Don’t get me wrong I’m not disappointed with the bike, it’s more the other way round.

I’m sure those extruded aluminium tubes resonate with a ‘for fucks sake, just getit done’ as I sit brakes clenched hard at the top of whatever everyone else is riding. Or the forks whispering ‘six inches of well damped travel here, any time you feel you might want to get involved, we’re ready to go‘.

There’s some comfort in that I’m not entirely alone, after an unguarded comment from a major bike company explained that at least half the buyers of their most capable bikes really should be buying something a little closer to their ability. As opposed to their aspiration.

Still I’m dithering. Which bike for the Ardeche? The shining example of a modern trail bike or the double chubby missing all sorts of important stuff too long to list; let’s start with tyres not vulcanised with a nanometre of sidewall, a set of forks clearly too short for anyone with a gnarly vibe, angles that don’t punch the front wheel out some way to the horizon, and many other components shoulder-shruggingly unavailable in that rural distract of southern France.

Let’s test that. The trail-centre at Cwmcarn is hardly a cipher for the unrelenting geology we’re riding a mere seven days hence. Better than the Forest tho which is pretty much loam. First descent burst the bubble these tyres have any mountain credentials. Small rock strike, instant deflation. No problem, fire up the tubeless repair kit. Ah, bugger left that at home – never mind a 27.5+ tube will get us going.

That’s at home too. Eventually we fashioned a repair using a stretched standard tube which eventually inflated the chubby tyre to something usable. And use it we did – riding both trails before climbing to the top of the uplifted downhill tracks. Before that, this.

There’s a logical fallacy which predicts ‘new bikes will make me faster’. Like that’s a valid metric to measure yourself by. If it’s a road bike, fine if that’s your sort of thing. Mountain biking is so much more nuanced. Quantitive measurement from Strava and the like is a pale copy of the richer qualitative emotions from joy to terror passing through calm, fulfilled, awe and joy. We’re basically an organic experience of the movie Inside Out.

Trail centres transfer most of the risk from rider to designer. Leaving us riders to abandon caution at the car park and throw ourselves enthusiastically at the epicentre of GPS surveying, complex funding, heavy machinery and blokes with spades. We should thank them all because when they get it right, they so do get it right.

Chasing Dean on a smooth but fast section reminded me of what I love about knobbly tyres of any width. That whole mythical flow thing. Being braver than you remembered last time. Marvelling at what bike designers might have been thinking, wondering if you can go maybe a little bit harder and giggling in relief when you survive answering that question.

The double chubby is beautifully balanced. It does require a willing audience though to get the most from it. Push it a bit and it pushes back with all sorts of haptic feedback. Let it run and it will run like Forrest Gump on amphetamines.Trees thrown at your optic nerves like sideways scrolling platform games**. Drops dropped, jumps jumped, corners apex’d with twisted necks and deep breaths. Stuff of life. Right here.

So yeah let’s ride the DH course. Been nearly 10 years since i last did that fully armoured up and mostly intimidated. This time not so much although with next week in mind, I started off small and worked down. Then we switched the final XC descent. Smooth I thought, not fast. Like the latter was ever going to happen.

Dropped in with my good mate David drafting the rear wheel. Remembered enough to leave the brakes alone. Trusted enough not to grab them inappropriately. Looking far enough ahead to swing the bike between perfect apexes. Popping over jumps and having a proper go at the only drop. It’s over in less than a minute, but that’s 59 seconds of undiluted joy.

After which my haste to say goodbye was triggered by the need to swap tyres to something at least one evolutionary branch displaced from paper. Done that, had a beer, not made a decision. Not riding now until we fall out of the van some 14 hours from here.