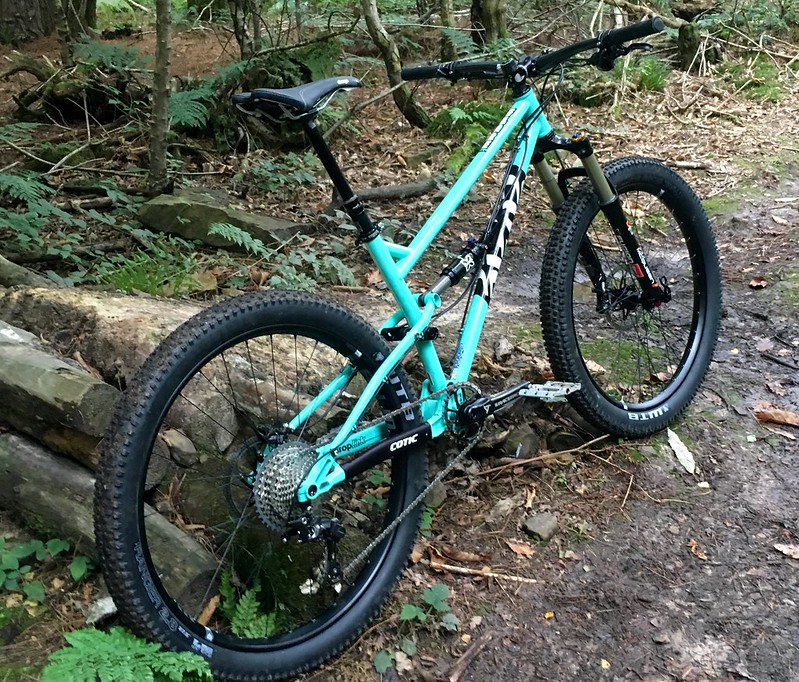 We established early on that fat bikes are silly. Ridiculous even. Especially when campaigned in their endless look-at-me-glory in a landlocked county miles from any sand. Short of riding through the detritus of a builders van, they have all the efficacy of a chocolate fireguard.

Fun tho. Most would agree, if only briefly. In the same vein as one should try everything once other than buggery and bankruptcy* – having invested none too wisely in Fat Futures, I’ve flirted dangerously with at least one of those**

So silly and fun, for a given value of fun. Oh no dear reader w’re missing the point here. Fat Bikes are nothing less than a gateway drug into the sordid world of the chubby. First we get fat, then we get chubby. Some may be dragged in only to publicly shun the dragon chasing rush of the semi-fat by pretending they did’t inhale, while many others are lost in a maelstrom of standards, sizes and a fetishness for rubber which suggests other specialist publications.

My name is Alex and it’s been 4 hours since my last chubby. And 4 months since the fat bike saw light outside the shedofdreams. Not quite true, I lent it to the local bike shop whose mechanic was extremely keen to give it a try. Two months later it was EXACTLY where I left it attracting much interest but no actual riding.

Not wishing to consign it to the endless experience of a bike shaped elephant man, I threw it back in the rather crowded shed between many other bikes all of which were being ridden. And a parts bin that had â “new bikeâ” written all over it. Which is probably the same phrase that’ll pointedly anoint my gravestone. Fat thoughi s still good. I’ve been to the USA recently. Trust me, fat can be very good indeed if you’re elbows deep into a burger the size of a small island and cheerful staff are reaching over to pass you a cold beer. 4 Kilos of overweight baggage returning in Seat 43c cannot be wrong.

Chubby tho is just a little bit better. In that if everyone is fat you don’t feel left out. We can all be big boned with an overactive thyroid. Slow metabolism, fast pie hand and all that. But when you’re pin balling between trees while your thinner tyre-d friends pop over the horizon, it feels as if you’ve been matriculated into a club of exactly one. And the piss taking. That can get a bit old as well.

Switch to chubby, and I’m still not going to be out front – unless everyone else wants a rest – but at least I’m in the same post code as those with whom I just climbed the last hill with. All the fat bike traits – other than the reflected glory of being visibly different – bonkers grip, monster truck roll-ability, nutty cornering velocity and cartoon looks are pretty much there. And you can suspend normal looking frames between them without breaking many of the rules that make mountain bikes endlessly practical. Suspension for a start.

Suspension on a fat bike has a few advocates. Most of whom waffle and displace in the manner of any modern politician. 4 inches of damped vertical movement fighting about half of that undamped by a massive tyre is hardly a byword for effective vibration quelling. And there’s the whole Fat culture which states one must be fully rigid to pass into the Masonic Groupthink.. All the time being vigorously bearded. Terrible generalisations I know but as I’ve just sold my fatbike I’m free of ridicule by association. Although not ridicule because of what happened next.

I have a chubby bike. It’s my Trek Stache. I bought it very cheaply in order to upgrade it very expensively. At which point it was perfect. Then I demo’d a full suss chubby in the pissing rain a few weeks ago. Wet roots, muddy trails – dampness abounded, it was an inauspicious day to pretend the emperor may indeed be wearing some new clothes. I loved it tho, not the one recommended but the nimble version as size below. As nimble as a pair of tyres summing to nearly six inches can be. Rode the bigger one, didn’t like it. Rode the one with normal tyres, didn’t like that either. Only had eyes for the Stubby Chubby. Which is pretty much the bike resembling the potential owner.

So I bought one. Built it last night- well not me but Matt which proved apposite since it involved innovative engineering way beyond ‘do you think this might invalidate the warranty’ when it came to certain components – rode it today. Box fresh bikes always ride the best, that’s the lore. New bike goggles rarely suggest anything else.

Will it make me faster? Of course it fucking won’t. No bike, however fantastic, can do that. If it has brakes anyway. Does it replace anything? No again I’m afraid. Although I sold the fat bike to a mate as he wanted one, whilst I’m currently in a mental cycle which thinksI don’t. Will I have more fun? Dunno, I’ll probably tell myself I am.

Do new bikes make me happy? Oh Yeah. Isn’t that really shallow? Indeed it is. Do I care? Not massively 🙂

*Apparently Thomas Beecham considered incest and Morris dancing the baseline a few years back. But Oscar Wilde got there first so we’re going with the senior man here.