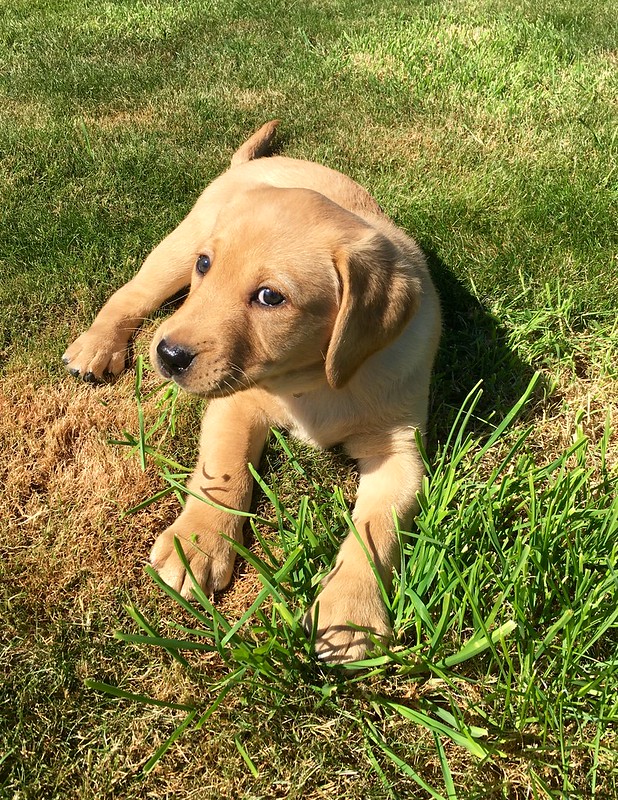 .. sounds like a setup for a joke. Very much likethe one we’ve all heard before. First time was eight years ago ending inthis punchlinewhere thesearch for furniture finishedin finding a dog we weren’t looking for. What are the chances of that ever happening again?

Based on the available evidence in the photograph, pretty damn high. However on diving deeper into the available data, of which the headlineis Carol’s firmly held maxim of ‘one dog, one wife’, ‘two dogs, no wife‘, the result was uncertain at best. This iron principle resisted the slightest bending even when tested in thewhite heat of numerous friends offering puppies with a cute score of 100. On a scale of 1-10.

Murf’s not getting any younger. Like his best mate, he’s going grey around the edges, a little wider in the middle and a fair bit slower in the twisties* Other than the prospect of any type of food, he only becomes noticeably animated when another dog turns up to play.

So my angle wasto position him as an ageing playboy who yearns for a younger partner to spice up his life. The other – unspoken – reason is in a few years there will be a dog shaped hole in our lives that I’m absolutely unwilling to fall into.

For all of this, Carol has been understandably steadfast as it is she who holds responsibility for adult behaviour in this family. Which includes considering how to fit a second dog into a busy schedule of school, clubs, trips and holidays. And a husband who will regularly waves an airy goodbye before buggering off to ride bikes in foreign climbs for weeks on end.

The odds, then, not entirely in my favour. Serendipity is quite the wonderful thing tho, fate rolls a dice and sometimes – just atthe edge of probability – you’re looking at a double six. Or the lovely person who sells me life-giving java beans innocently offeringa phone full of images cataloguing the early lives of her labrador pups.

Accidents abound. Her two dogs were separated by a stair gate but the primeval urge to couple provedthis was no barrier,leavingthe bitch to deliver three healthy puppies a couple of months later. All were spoken for, but we pleaded if any became available then a perfect family would be on the point of ecstatic explosion if one could come home.

Possibly overdid a bit there. Next day tho, Carol returns with no.1 child to show this absolutely is a family affair, but with holidays looming we’re second in the queue. I’m in full expectation setting mode, but secretly hoping for fate to roll me a second double.

Dropping aerial anchor in San Francisco**, my phone beeped with a hazy picture and a clear message the pup was going to be ours. Much rejoicing in the little family unit until jet lag kicked in, but regular PUPdates(c) tied the thread across two continents. The pup was both lovely and clearly and a bit of a hooligan. Many pictures of her eating things, anything really, attacking her sisters, her owners and – for reasons not entirely clear – the dishwasher.

It’ll be fine I thought. She’s a lab. Placid. Check out Murf. Exhibit A over there, couldn’t be any more laid back even if we spiked his food with skunk-weed. Arriving home, the kids and Carol had their first experience of Amber – both her innate cuteness and needle sharp teeth. I was out riding of course. I mean pups are important but I hadn’t been on a proper bikefor three weeks!

Thursday last we fetched her from the vets. And the owners who were a little teary to let her go. Got me as well. Lumpy throats and promises to bring her back soon eventually separated her from the mother ship. Back home to our pup proofed house and – basically – BEDLAM.

Murf went predictably mental when a self-throwing stick cowered under the chair. Since then he’s had an expression of extreme tolerance that pretty much translates to ‘she’s not going home is she?‘ The pup steals everything. Shoes, food, paper, boxes, wellington boots, electrical leads and, in an audacious heist, nearly a full bottle from the wine Dalek.

And all of Murf’s toys. Or her toys as they have been re-appropraited. It’s funny watching the short legged pup playing wall of death as Murf attempts to swing her off the end of his favourite stick. She’s fearless tho, and he’s so bloody good natured that there’s only ever one winner. Twice he’s swatted her with a big paw but even when she’s chewing his tail or sitting on his head***, he just turns those big brown eyes to me that say ‘Senior Man here. Bit of respect wouldn’t go amiss‘.

Probably not going to happen. At nearly 10 weeks she’s growing fast enough to notice it on a daily basis. She’s peeing on the floor a little less and starting to understand total anarchy isn’t the prevailing world view. Still a pup tho and a very different personality to Murf.

I hope she makes him happy. I think she will. She’ll certainly make us happy. It’s like having two kids, you never halve the love for one of them, merely double it. I know not everyone gets pets, but I wouldn’t be without them. Even when the latest addition justchewedmy iPhone 😉

*to be fair neitherMurf or I werevery fast in the first place, so anydecline is barely noticeable.

** at the end of which the co-pilot wasgoing to have to do some fast talking to explain that landing. Both of them.

*** these are her two favourite activities.