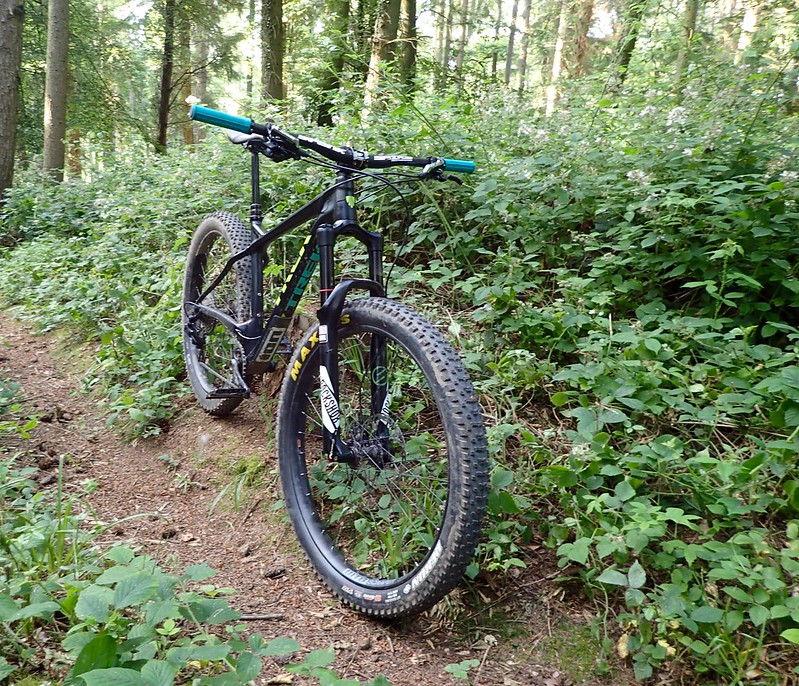 That’sparaphrasing Buzz Lightyear; now that was a toy who constantly over-stated his own importance. So deludedbelievinghecould fly. Yeah, weâ€™ve all been there Buzz. Thereâ€™s an ironic tautology in hisoriginal mission statement with infinity being unreachable so making beyond achievable. This is how I think of my quest to divine the perfect bicycle.

In a world of chaos, standards should bring order. Which would be fine were there not so many competing ones to choose from. Not satisfied with creating three wheel sizes all within a finger length of each other, those cheeky innovators – who cunningly fuse product and marketing in onomatopoeic triumph – make serious claims that the one true way lies* in increasing both length and girth**

Enter boost, the proto-standard for wider hubs, stiffer wheels and fatter tyres. Not fat bike width because thatâ€™s both silly and already selling to a willing audience. Mostly vigorously bearded within an ever decreasingcircle of like-minded fundamentalists. So â€˜Plusâ€™ are differently great squashing into a niche between too fat and not quite fat enough. I should know I bought one but really wanted two. For even within this brave new world, no one is quite sure yet who might be king – is it 29+ built into special frames with bold new graphics? Or itâ€™s littler brother, 27.5+ surfing on the zeitgeist of last years brand new thing which is cram-able into existing frames with just a fork upgrade.

I ignored such obvious increments feeling because my big Chubby was already so good. The only thing I didnâ€™t much like was the fork, festooned with more knobs than a BMW event and equally slippery in the corners. So in a budget conscious upgrade I researched and purchased a replacement with a little more travel ignoring my peers who live by the rule that moooarr is always better. An extra inch would be fine*, perfect in fact. Except the product researched was not the same as the one purchased – a technical oversight only appreciated once weâ€™d cut the steerer and attempted to refit the 29+ wheel. In that order. Fork would only fit 27.5+. Bugger.

The sensible option – having drowned the mirth of my mates in beer – would have been to sell at a small loss and start again, or stick â€˜em on the shelf as realistically they’d behandily located close to the conveyer belt of my bike ownership. What I did instead tells you a lot about my insanity trajectory. Fuelled initially by a slightly less piss-taking pal who offered me his 650b+ wheels to try in the frame. Great I said, except the front one wonâ€™t fit as itâ€™s last weeks standard. No problem Iâ€™ll just build a new one as – again – proximity to the shed suggests itâ€™d end up being useful for something. In this case as the front half of my shortened dandy-horse with bits flipped and wheelbase shortened. Most bike makers have no idea which standard mightfinally stick so are designing frames to take basically anything in a throwing shit at a wall kind of way.

Even this simple change wasnâ€™t simple at all with 10-to-11 speed conversionsbeing wrangled around SRAM and Shimano refusing to accept the existence of each other. Eventually we hit the trails at which point my first thought was â€˜I wish Iâ€™d bought the longer fork now the wheels are smallerâ€™. Said nothing tho as not wishingto be an accessory to manslaughter when anyone within hearing distance died from laughter. A few more rides convinced me this could very much be the boost I was looking for. Upsides included far snappier turn in – tales of ringing bells and shouting full right rudder from riders on 29+ are over-stated – but thereâ€™s a difference in the tight stuff where this felt closer to an extremely well damped hardtail and less like a full on fat bike.

Acceleration was a little quicker, tyre choice is better especially if you have access to Haydnâ€™s rubber emporium where he seems to have bought every plus tyre known to man and possibly a few illegal remoulds. Downsides were thereâ€™s a bit of cush – especially on the rear – you lose and a little of the monster truck roll over is compromised, but mainly that my tyre-hoarding friend not unreasonably wanted his wheel back.

Again if Mr Sensible were in the driving seat, weâ€™d be back on the road to financial probity and refitting the parts owned and paid for. Never going to happen because Impetuous the drunk took the wheel, crashed into the bike shop and pointed at shiny new round things demanding the owner â€˜take my moneyâ€™, Which he did delivering back a perfect wheel naked as the day it was made. A second trip to Haydnâ€™s warehouse of all things rubbery and we were ready to go, travel great distances and conquer huge obstacles powered by rightness and the satisfaction of having followed our dreams – a place where logic, rationale and imminent bankruptcy rarely get a look in.

Except we werenâ€™t. Because the disks from the old wheels were one standard and the new ones something else entirely, And the chain too worn to run on a new cassette which also necessitated further transmission purchases to guarantee smooth running. Smooth that is, if a little harsh – you see I couldn’t shake the feeling that a 140mm fork would be so much better than the clearly inferior 120mm admirably holding up the front end.

Parts were ordered, parts failed to turn up, suppliers were shouted at, parts still failed to turn up, the world turned and I kept riding the chubby in drying conditions. And it was close to brilliant on the local trails, bang it into a corner, MBR high elbow optional – but you know for the look of the thing – eyes on the apex, fingers off the brakes and experience the magic of 3 inch tyres biting into tortured dirt. If you push just a little bit harder, itâ€™ll fling you out the other side with little pilot input other than a big grin. Sure all bikes do this, but chubbyâ€™s do it a bit better if – like me – youâ€™re not really very good at the whole entry-apex-exit thing. So yeah, fab but that forkâ€¦.

Finally the part, which Iâ€™d now recategorised as a mythical beast that was much heard about but never seen, arrived and a single day later we were riding atop a longer fork and IT WAS FINISHED. Irritatingly finished 24 hours before a family holiday entirely incompatible with tree splattering injuries. Best take it easy then especially as the suspension-man gave me strict instruction to run the fork a little harder than my normal â€˜yeah thatâ€™s abut rightâ€™ level of sag. Mincing about it still seemed to be going quite fast, with the now perfect fork using nowhere near fulltravel even when challenged with some of my rubbish landings.

If anything tho, it whipped round the corners with even more precision. Not a word to be used lightly when Iâ€™m behind the bars. It gave me a bit more confidence which was rewarded with a bit more speed which then led to less braking and even more speed. Speed being a relative term but the devil that is Strava said nice things once weâ€™d dusted ourselves off in the pub.

So have the four figure upgrades delivered value then? I guess that depends on your definition of value. Qualitatively, absolutely not – the cost of the minor increase in performance cannot be justified evenwithin the skewed universe I inhabit.Qualitatively tho – thatâ€™s harder, itâ€™s been a fun experience and I absolutely lovethe chubby. The Aeris is a better all round bike of course, but I think the plus bike is just a bit more fun. As if it makes cornering – which makes up a fairly substantial part of of the riding metier – a little closer to perfection,you cannotput a price on that.

Two things to finish on – firstly after that first ride a good 20mm of suspension travel remained unused. Yep exactly the place I came in thinking that was all the bike lacked. Secondly my favourite bike manufacturer has unveiled some thigh-rubbing chubby full suss bikes two of which Iâ€™ll be demo-ing next month. I canâ€™t see that ending well.

**and thereâ€™s not many who would argue with that. Not those with x and y chromosomes anyway.

*** Iâ€™m not doing this on purpose. Iâ€™ve already taken out two references to â€˜flange’