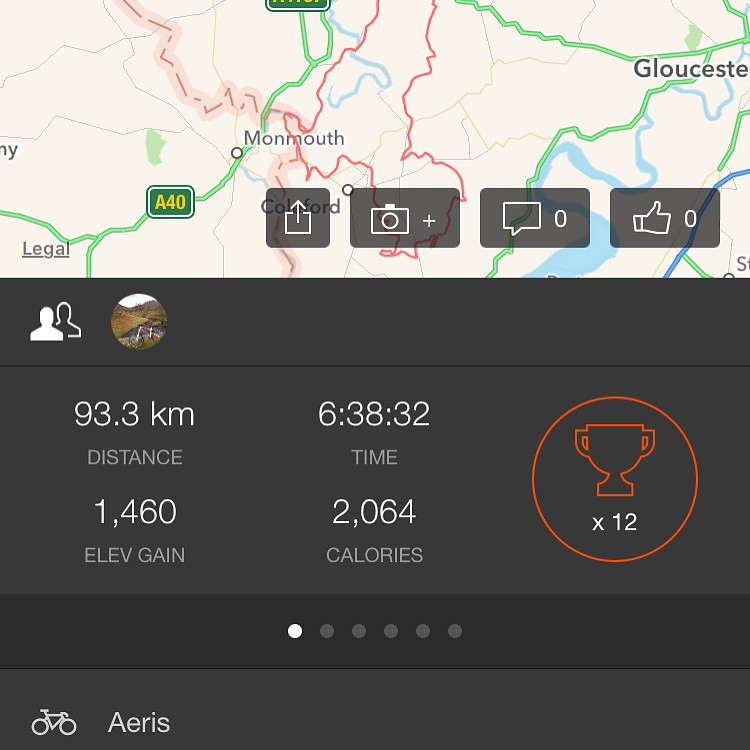 It’s not climate change, it’s weather. Can’t help feeling it might be both with the Jet Stream lying heavy at a blocking latitude so separating our little storm tossed island from a baking continent. Meteorological BREXIT right there.

I believe a heartfelt ‘fuck it’ might be in order here. Get on the bike and pedal into the warm rain. It’s more tropical rainforest than temperate atlantic. Sweat is everywhere except up top where it takes a further two miles to reconcile cool head with lack of helmet. Sign, switch direction, grab hat, turn about, check watch, second fuck it of the day, crank like a man being chased by a bear to hit the start deadline.

This, I reflect, breathlessly is exactly the reason riding starts with driving – solving difficult pre-coffee problems of spikey bikes and knackered trailers equating toa 10 minute journey into Ross. Ignoring internal combustion it’s only 5 minutes longer to get there under my ever increasing steam. Rarely do so tho due to the prevailing geography of a sodding massive hill inconveniently positioned between pub and gasping collapse in the shed come 6pm. Not today. I refer you to previous fuck it comments.

Arrive at rendezvous. Nonchalantlymention I’ve heroically ridden 10km to get here. Receive little vainglorious feedback. Make the pointit a bit more strongly. Still not getting much back. Sulk as we head out on relentless damp trails that were last dry in April. As a dirty protest I’ve refused to clothe myself in sufficient winter gear to waterproof a small elephant, but ground conditions suggest I may have chosen poorly. Never mind on we go.

Two hours to Bacon. There’s not too much excitement in between. A steepup’n’down in the local woods, then broken roads and steep tarmac ascents with flat puddles reflecting riders silhouetted by steepled cloud. It’s good to be back out on the bike tho after a week of travelling, London, meetings, early mornings and late finishes. All that falls away as we climb two valleys before finally dropping into some singletrack wet after rain but joyous nevertheless. I bottle a jump, fall into a hole hidden by Dr Livingstone vegetation but nevertheless arrive at Burnt-Pig-Central only mildly bruised and muddied.

We pick up Tim – a new member of the cohort yet to be inducted to the order of the Claret. Only a matter of time as we head off into the Forest whichlast week was pretty much winter except with warmer water. It’s a little better this time around but still hard-pack is a distant memory. As is my fitness which appears to have already left for its summer holidays leaving me to gasp uphills with legs only interested in a mutinous walking of the plank.

Finally some downhill. Pretty good as well, breathed on by the trail pixies, it’s flowy, bermed and occasionally enlivened by scary gap jumps. We all make our way down except for Tim whose brave effort at a slippy roll in endsin multiplebleedings from three different extremities. Welcome to the club fella – you might want to think about some knee pads.

We ride on – Tim’s far tougher than me and doesn’t complain about his various leakages – first re-learning winter skills on an exposed trail and then pine needle harvesting on a long singletrack best remembered for wild hip movements and shape throwing threadingwide bars throughnarrow trees. I bang my shoulder twice and flip a bar plug out, after confusing cockiness with precision, but we’re through and relaxing with an ice cream in the rain.

Inevitably talk turns to what’s next and my entreaties for a quick route home are counteredby the DDM (see here: https://pickled-hedgehog.com/?p=3361) fundamentalism which suggests no one is close to death yet. So it’s another big climb followed by perfect dirt seeminglyunmarked by the rain. So much fun, it was almost like summer out there.

Not for long. Road grind took us to the other side of the forest mired deepin slop and energy sucking terrain. Get that done, head to the pub on thankfully drier trails. Quick check of the watch shows the little hand on 4 and I’m still 25km from home. Doesn’t stop the clamour for a beer, but stays the next one as we train it back to Ross with the first tailwind of our day on our backs.

Another pub. Another pint but then I’m up and gone leaving the fellas to the late afternoon sunshine and their G&Ts. Passed what is normally the last climb at a far reduced pace knowingthe next big hill wasn’t being conquered in the car.

That last 10km was a bit of an effort. Desperate to freewheel to ease cramping limbs and – frankly – an arse which really didn’t want to spend another second on the saddle. Finally home hoved into view. There were no banners or finishing lines, merely a shed to dump the bike and a long suffering partner offering me food, then more food and when that was done, whatever was left in the fridge.

The following morning I was walking like a cowboy recently introduced toa difficult horse. Sometimes though you have to test yourself a little bit. Extend the horizon, don’t take the easy option, see how far you can push your ageing body.

Go long or go home. Or in my case, both.