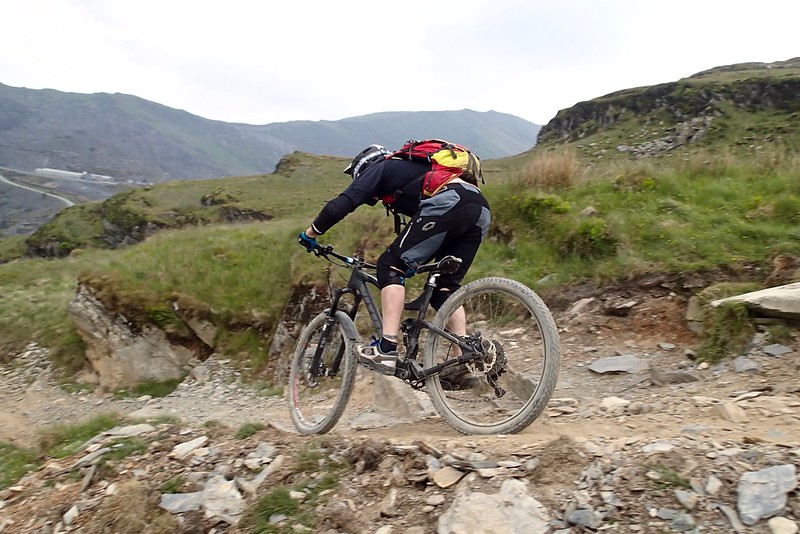 I love Antur. Love is not a verb often thrown around by a professional Yorkshireman. Especially consideringthe opposite is hate, and that’s an emotion cast large by the fan-like vista opening as youclimb into the industrialised slate valley home to tracks inspiring those poignant extremes of non sequential thoughts a million miles away from ambivalence.

I love this place/I hate this place. I want to ride/I want to hide. It’ll be fantastic/I’ll be useless. People I know well, who’ve shared their insecuritieswith me, appear entirely unconcerned whilethey encase themselves in body armour and full face helmets. I’m clumsy with taped fingers and adrenaline spiked muscle palsy. Is it me? Probably.

Normally I’m quick to fabricatean excuse for my piss poor performance. Today tho I’m ahead of that gamewith a broken finger encased in a fatsplint. A visual metaphor for rocking the MinceCore vibe, a reason to be last, a chance to stop after barely getting started. And the first run almost triggers that release clause,

Two fingers to grip the bar- one of whichis pumping the brake lever. Everything feels forced, nothing feels natural. Views of riders I can normally hang onto breachthehorizon wide angle, the bike feels shit and I feel about the same. Taped fingers hang useless under the bar, and even tho it’s barely midday I’m keen to join them there.

Three runs. Not getting any better. Stop for lunch and have a whinge. Matt wonders if removing my head from my arse and just be grateful for riding at any pace might not be a bad idea. He’s got a point but I’m not keen to accept it. Instead I angrily hack away first at my gloves then my taped fingers to release the working one from the broken digit.

Things are immediately better. So much so after a few runs we head for the Black which nearly did for my mate Rex last year. I didn’t ride that section which in no way stifled the joy of the next kilometre blasting over rock gardens and having it small to medium over the jumps and drops. Oh God, this is why we do this, this is the love of the mountain, this is the antidote to the tired existentialismof living on the margins.

Three times my mate Ian and I did that trail. We left the others to do their own thing. Faster I’m sure, having more fun? I not sure about that at all. The uplift bus heaved us up for onelast time oncewe’d greedily shoved dusty bikes onto thetrailer.

A single nod triggered the three pedal rotations to breach the entry. Then it’s freewheel, look, really LOOK, unweight, weight, brake to avoid smashing the double with a front wheel, deep breath loud in the full face as you drop into a rocky horror. The bike is way too good and you’re out and accelerating.

Sure you’re not clearing the massive tabletops or taking on the biggest drops but your beating heart is smashing the message against your chest that you are really alive. We weren’t fast but we were smooth and sliding into the car park we shareda self-conscious fist pump* and a massive grin. That stayed with us all the way home.

Here’s the thing. Mountain Biking is living in the moment. There is no time for nuance or procrastination. There is no middle ground. Selfishness is a winning attribute. All you can think about is you, the bike and the trail. That’s it. Life isn’t like that. Well there rest of it anyway. This is the balance, the counterweight, the release of a shitty day, the reason to conform.

If you don’t have this, how the hell do you carry on? Seriously, without adrenaline spiked muscles gently rocking the bike, without the dry mouth, without the minds-eye projection of a splattered you, without the visceral joy of getting it right, without the entirely non english giggling with your fiends, without being not quite like you, how the fuck do you put a suit on to chow down some corporate shit?

This is not a zero-sum-game. There are consequences of treating beingaverage as someone else’s problem. Injury, elitism, financial disaster, selfishness…. the list goes on but so do we. Because five seconds of dropping into something scary with an awesome bike underneath you and your greatest friends besideyou is worth all of this.

I’m writing this with an aching finger that clearly would heal better were it not being subjected to serial battering by glacial history. A sensible person would do nothing, play the long game, refuse to regress to childish instant rewards – essentially be an adult.

*to be fair I can’t shake hands right now so cut me some slack.