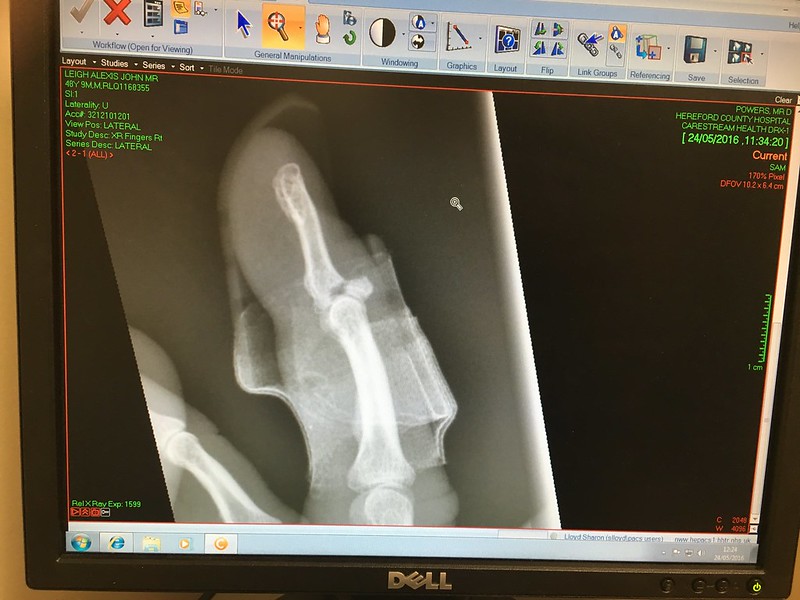 Since being born again into the church of mountain biking some fifteen years ago, hospitalisation has only been required on three occasions. Two broken ribs, one floating piece of shoulder bone and a should-there-be-a-bone-poking-out-here? knee. Not a bad return at all when considered against non biking trips to A&E including being run over twice – first time shattering my pelvis, second bruising me all over and breaking my nose. Which I then broke again two years later attempting to ram raid a supermarket. With my face*

50,000 or more kilometres and only three major accidents. Thatâ€™s because Iâ€™m not very brave. For the others, well clumsiness is an appropriate catch-all for my endless pratfalls. Which makes sitting here nursing a broken finger so bloody annoying. I crossed the streams of mountain biking and denuded spacial awareness with the inevitable result. Even so at least a hundred times Iâ€™ve swung into the back of Mattâ€™s van using the usefully supplied handle that is both inside and safe. Neither of which can be attributed to the â€˜Aâ€™ pillar,over whichmy fingers were inappropriately clamped, as Matt hard-slammed the substantial drivers door.

Not his fault, I put those fingers in harms way. Third one on the right hand was now stamped in a perfect facsimile of a T5 chassis. That smarted a bit but an impromptu sitting of the MTFU fracture clinic assured me it was merely bruised. A while later at the hotel, they demurred a bit and suggested any finger that shape would be well served in Kendal A&E. But hereâ€™s the problem; we were one day into a long Lake District weekend and any hospital intervention was likely to curtail the next two days riding. And anyway the bar was open.

Even with the healing power of beer**, the next morning brought no improvement unless â€˜being a bit more blackâ€™ counts. For a second I considered not riding withit. Lakes, mountains, epic views, carries and climbs, massive rocks and scary steeps. All of these were waiting, as was a day looking out of the window wondering what I was missing. I decided not to miss it and anyway the third finger is kind of optional. Index for braking, digit two for grip, little finger for balance, third finger like bloke#3 in the bobsleigh. Basically ballast.

Thatâ€™s what I told myself anyway and even tho it was pointing in an entirely different direction to itâ€™s perpendicular brethren, the might of modern disc brakes and six inches of suspension made it nothing more than uncomfortable. That particular bike looks its cue from the rider and broke something rather important in one of those dampers. So the next day it was more of the same only this time on a rigid fat bike. Still all good, except the finger colour was now all a bit Hotblack Desiato. ***

Arrived home and was rightly sent to A&E which quickly showed a clean break at the top knuckle, with the bonus of a slice of bone sticking out. Local medical professionals took one look at that before rapidly dispatching me and the finger-bobs homage to Hereford Fracture clinic. Where I was breezily examined, x-rayed, splinted, briefly pontificated and then sent me home in a very non NHS 90 mins start to finish. The finger quack did want to operate originally which involved 3 wires, a general anaesthetic and 12 weeks of no useful finger mobility. Which included a ban on riding bikes and driving. So we had a worried-man to distracted-man discussion until I talked him out of it, although his main priority was to remove me from his consulting room. To be fair, it was lunchtime and he looked a hungry sort.

Upshot is finger will always be wonky, should get the grip strength back, physio will be painful but in the interim CAN RIDE MY BIKE. The prospect of 12 MTB free weeks as summer wafts over the seasonal horizon left me desperately unhappy. Had it come to pass Carol would have been forced to call in the bomb squad to effect a controlled explosion of the Grumpy. In 4 weeks – the advice says 6 but Iâ€™ll beat that – Iâ€™m back to see Mr â€˜are you still here, I thought we were doneâ€™ for another x-ray hopefully showing just the one bone in that finger, knitted if knobbly. And that finger all pointing in mostly the same direction without a comedy droop. 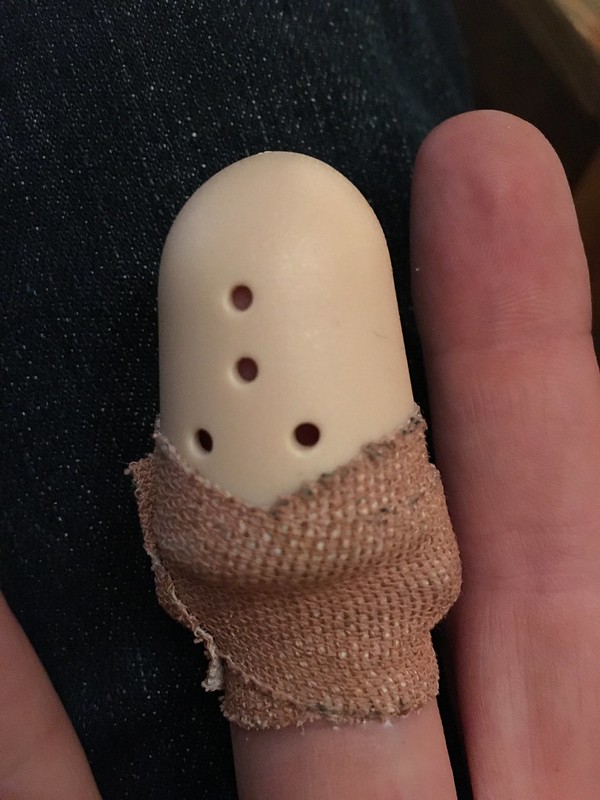 Until then I am CHUBFINGER. The splint is massive, doubling the size of the digit and encasing it in a rigid plastic prison. Consequences include activating random car instrumentation with chubfinger toggling any switchgear radiused within a foot of the steering wheel. Typing is a pain in the finger even with my two digit hunt and peck style. Basically Iâ€™ll need a keyboard with a metre square return key if Iâ€™m not to delete every second word. Riding has yet to be attempted, but Iâ€™m in the process of creating a franken-glove and a route for an easy ride to test it out.

While I gained permission to get back on the bike, the rider was swiftly added not to fall off it. Iâ€™ve modified that to donâ€™t fall off right. Since my serious injuries were left knee, left shoulder and left side of the rib cage, I think Iâ€™m in good shape. Although from a finger perspective, thatâ€™ll be a slightly wonky shape.

Im 10% into the 30 splint wearing days before the next examination. And already itâ€™s pissing me off massively. The option though was three months of staring out of the window getting fat and angry which may or may not have resulted in a slightly less wonky finger at the end of it. Or infection, or nerve damage. But to be honest it was â€˜ride now or ride in 12 weeksâ€™ that made the decision for me. If thereâ€™s one thing Iâ€™ve learned in my 48 years it’s thatinstant gratification represents pretty much my default state.

One other thing Iâ€™ve learned in the last week is do not place fragile body parts in areas of potential percussion. Rather wish Iâ€™d learned it maybe 1 day before.

** and port. And whisky. Cut me some slack here, I nearly lost the arm ðŸ˜‰

*** HHGTTG. The books. Not the crap film. If you havenâ€™t read them and youâ€™re reading this, you need to have a SERIOUS look at your priorities