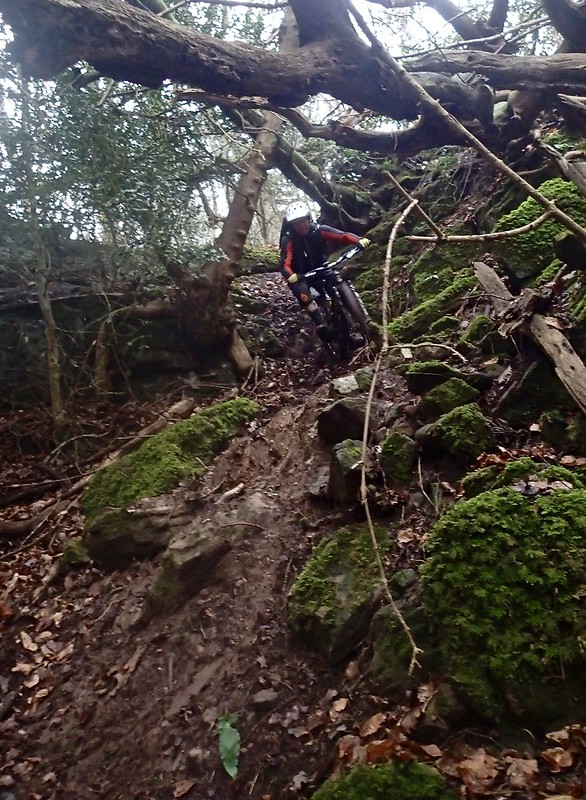 Weâ€™ve all met the insufficiently medicated nut-job who allegedly pines for winter.* â€˜Oh itâ€™s not proper mountain biking until partially frozen mud has forced itself up your arse crack and the bike requires a special harvesting machine to release it from its claggy mold‘

Without washing to be pejorative, such swamp-monsters tend to be over endowed with vigorous beards and intransigent opinions while lacking in perspective, friends, personal hygiene and gears. We can therefore discount them as unhinged singlespeeders and move on to a rationale discussion.

Winter is a placeholder for spring. Thatâ€™s all it is good for. The season used to roar in with freezing winds and precipitation settlingas a sledging carpet. Nowadays itâ€™s rebranded itself to â€˜Autumn Plusâ€™ – dark, endlessly wet, windy, grey and entirely lacking in joy. Cold, Frozen trails or FatBike approved snow dumps are merely fading memories as was the last time I returned home without having to pass through the entry portal housing â€˜the bucket of doomâ€™**

So this happy place seemed an ideal point to undertake the first death march of 2106. It started early under cold grey drizzle and ended with lights blazing the puddle strewn road home. The entire day was spent searching for new trails – or at least drier ones – under Stygian skies.

Trails that will be awesome when they are dry and Iâ€™m fit and injury free. Zero out of three scored there dulling even the brightness of new bike love. The chubby trek slid about with as much panache as anything under my dubious control, but my breath seemed to be coming mainly from my arse and my knee was all a-twinge. Bah, two or three months more of this before the mythical dry line? I shallbe found inside making serial deposits in the grumpy jar.

Or maybe not. No point wishing your life away. Not when youâ€™re as old as I am anyway. Actually this is pretty bloody good fun right now. Sure my knee is a – mental and physical – pain but it wonâ€™t stop me riding nor shut me inside cursing at the rain. You cannot control the seasons but you can confront them with a ready grin and the undeniable knowledge that normal people consider your actions borderline certifiable.

Every ride has certain moments. The longer the ride, the more of them you get to experience. Matt fell into a stream. That was bloody funny. Then we found a mile long new trail which we knew had only been ridden once before because it was revealed to us by the man whoâ€™d finished building it the day before. Arcing through the trees while pine needles sprayed hedgehog shapes was a wonderful release from the trudgery of the mud-suck.

Even my â€˜spirit of Californiaâ€™ rear tyre couldnâ€™t stop the fun. Sure I walked a couple of climbs others rode, and enjoyed – or sometimes not so much- second long tail-slides through sloppy corners but remainedmostly upright and un-barked by tree.

That one trail was worth an all day slog al by itself, but luckily we found another one as we headed down to the river. Not very well defined, but well enough – which was encouraging as part of this valley terminates on or over a a cliff edge. We knew it would steepen, and when it did a tunnel of slick rock corkscrewed around stout trees and stepped over tractionless roots.

I could barely walk down it. So slick was it with with mud, the gradient made standing up merelya prelude to falling over. I twisted my knee on doing so and used up my quota of swearwords for the week. Then hopped back over to a handy rock to record Cezâ€™s attempt to ride it. As ever, 100% commitment, no self doubt, straight in at a speed that means you cannot stop and carve, slip drop, dip shoulder, sway *just* past the last tree and away.

In the summer I thought. On the Aeris. Having scouted a line. Maybe, maybe not. Whatever – itâ€™ll still be there and so will I remembering the day we found it. Down at the river now and onto a well ridden path ending at our favourite pub. We scooted straight past heading to a second establishment which welcomes muddy cycliststo its heated environs.Even drinking lime juice with a coffee chaser didnâ€™t really dampen the warm glow of a wet day spent on mountain bikes.

Darkening skies and rain pecking at the window got us moving. Our lights danced over dormant vegetation and hibernating humans as we climbed the last hill home. I felt that woozy head/hollow leg feeling of too many calories expended and not enough consumed. The marks of a proper winters ride – muddy, cold, hungry and the owner of a bike hardly identifiable as such.

I dumped that new bike in the shed. Itâ€™s still there probably identifiable under thick layers of mud until a hosepipe is deployed. Itâ€™ll need a clean beforeour next outing.I donâ€™t want to wait until Spring anymore- I just want next weekend to come round a whole lot faster.

Snow would be great. Frozen trails even better. But if I canâ€™t have those, riding mucky circles with my friends will do me just fine. Until March anyway.

*Surely this is a lie. If not then such an individual holds an extremely strange interpretation of enjoyment. Probably watches those TV programmes where kindred mentalists staple cats to their ears for some purpose no one within grappling distance of sanity can divine.

**A mandatory receptacle for all mountain biking outerwear. Because we canâ€™t afford to buy a new washing machine every year.