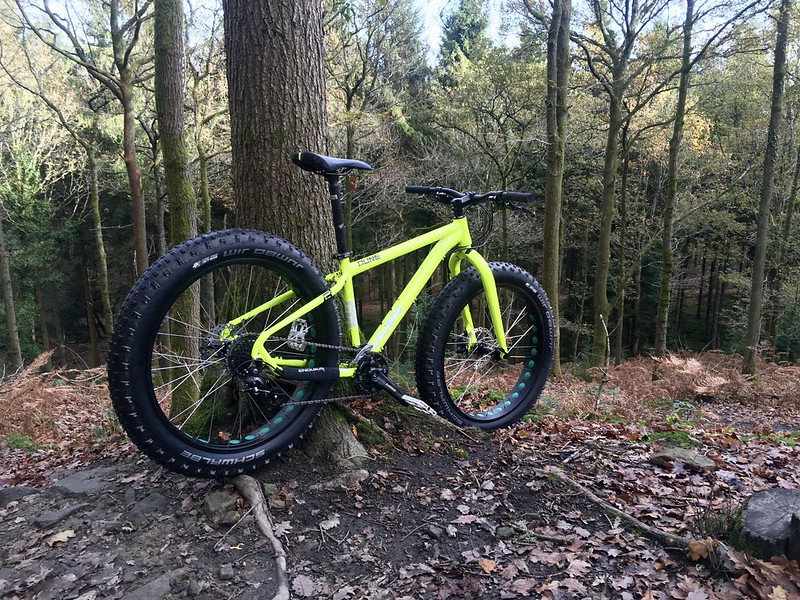 Nearly eight years ago we found ourselves on the threshold of a chaotic slew of barns -stuffed with furniture we couldn’t afford because most of it had been chiselled out during the reign of Queen Anne.

We were in the wrong place at the righttime so naturally we becameheroes* Displacement came in the form of a 12 week old labrador innocently chewing a table legworth substantially more than even the eye watering sum we handed over for the proto-Murf.

Money well spent for apup who has rewarded us with his basic labradorness over most of the last decade, and for whom I will morn deeply when he is no longer with us.

History suggests a less painful parting from my latest purchase. Nor do I expect bemused mutterings of ‘eight years since we brought that home? really?‘ to accreditlongevity of ownership. My good and true riding friends are already taking bets the stupidbike(tm) won’t make it much beyond Christmas.**

There are however strong parallels tho between dog and bike. Firstly they cost about the same, and secondly their attachment to the pack came as as much a surprise to them as it was to us. To whit: I followed most of the family into asoulless warehouse hawking cheap outdoor gear wth the sullen dragging tread of a bored teenager.

Shoes were required. For reasons entirely unfathomable this always takes fucking ages. Genuine confusion squats on confused countenances whenbeing interrogated over personal shoe size. How can you not know? It’s not like it changes much over the age of about 12. Basically one step above ‘my name? yes, I know that one, just give me a minute…’

Carol strode off confidently in the direction of the ‘wall of shoe’, while Jess veered off randomly as if swept up in some unseen gale. This is not unusual behaviour for ateenager who oft reminds me of the hound in the film ‘Up’. You know the one: ‘Squirrel!’. But this time there was some method to her randomness.

‘Dad, Dad, look at that!’. Look indeed. The first thing that hits you is the ridiculously fat tyres closely followed by the eye popping colour somewhere between green, yellow and optical pain. Instantly I was back to those rambling rooms chasing a wayward pup between priceless antiquities.

That’s a bloody labrador I thought with some glee. Quickly I door-stepped an assistant who wanted to tell me all about how the bike had been developed by their own internal team. Couldn’t be less interested- he’s lucky not to lose his fingers withsuch slow pedalspannering so desperate am I to have a go.

Just get on with it man I muttered. Probably under my breath. Finally the seat post wasextended and crappy pedals mostly attached to dubious looking cranks. I cared not- two pedal strokes in andobviouslyit’s coming home with us. Eager to please, a bit stupid, probably a tad overweight and mostly useless in every possible scenario except being at rest.

Yep that’s a labrador. It was the same riding it for the first time. Although my eagerness to find out exactly how silly it maybe was stayed by car park conversations into which everyother rider castan opinion. Mostly mining the endless seam of ‘not much snow for that today mate‘

Oh my sides. Put up with for a few minutes in the spirt of fraternity before wishing them all well with a pleasant ‘fuck off out of the way or I’m running you down‘. And then we’re off. Three seconds later I’m cackling like the bloke firing up Frankenstein’s monster.

There is absolutely not point in providing some kind of serious ride report. I’ve ridden loads of bikes – mostly with at best a thin veneer of competence – butnothing compares to rolling about on 4inch tyres inflated to 9PSI. It’s like a bike but only in the same way that parachuting is similar to being shot out of a cannon.

The sensations are similar but delivered in an entirely different way. And to a different soundtrack. Whump, Whump, WHUMP, Giggle. Uphill it’s fine, not racy but not as pedestrian as expected. Grip is phenomenal. You could climb up the side of a house if you had the legs for it.

Nimble as well. Fully expected to be travelling in whatever direction the lab/bike hybrid decided might be most interesting. Not like that at all. Easier to hustle round hairpins than my 29ers, and holds a line like a snorting Shoreditch hipster with a rolled up tenner.

Downhill it’s just funny. There is no other word for it. On dryish trails you cannot be braver that the tyres. Lean, lean, lean a bit more and feel the tyres knuckle down over loose ground. For balance, there isn’t much with these tyres on fresh mud. Aquaplaning is pretty much the only way to travel. That’s fixable by throwing cash at entire rubber plantations of knobblier compounds.

Not today tho, I stuck to the groomed trails of the Forest wondering how something so ridiculous could be so involving. Then I remembered similar feelings playing stupid games with the kids when they were young. You think maybeembarrassment is appropriate, but small humans give you excuses not to act your age. Fat bikes are just the same.

They are not however without issues. You can roll over anything but not for very long. They drag off those tyres – strangely more obviousdownhill – is epic. Braking is largely optional and that’s fine as the stock brakes are terrifying. And while the suspension characteristics of an undamped fat tyre are noticeable, there is no magic there. Hit something square edged and the force is transferred pretty much untamed to wrists and ankles.

I found some little drops off and marvelled as time stands still when the tyres return to the earths’ surface. The rebound is so very slloooooowwwww. It doesn’t feel entirely safe but guess what? It’s as funny as hell.

15 kilometres I suppose. No idea of time. Strava segments superfluous. Metres climbed, some. Metres descended at two giggles per second. It will not replace the brilliant bikes alreadyin the shed, but anytime bigsmiles are requiredI’m dragging it out.

It’s a labrador. It just can’t help itself. And neither can I.

** I’ve counteredwiththe line ‘a fat bike is for life, not just for Christmas’. Going out on a bit of a limb frankly based on my revolving door bike purchasing policy.