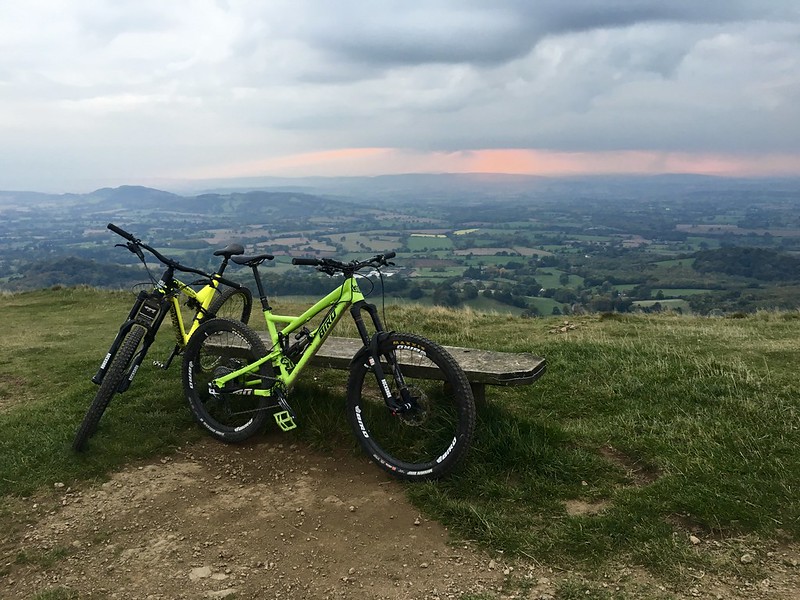 Last week was rubbish. Vocationally such things are commonwhen the best laid plans meet that stimulating and challenging group of randoms otherwise known as customers*

Not this time. I was riding my bike. Although not really. More slithering darkly between – and tediously often into – trees attempting to reconcile mountain biking with my friends andthe extreme grumpiness of not being in the pub yet.

Excuses were legion. I traded them in the car park explaining to anyone who even pretended to listen that night-riding was for those with proper 9 to 5 jobs, my lights were at best ciphers for 13th century monastery candles, this bike – this one right here – had questionable suspension at the front, none at the back and about an undamped inch derived fromthe broken dropper post.

No one cared. Quite rightly. They just fucked off at light speed engaging the Chinese lumen photon drive with nary a care for ground conditions best described as boundlessly shit. Two days torrential rain had turned rock hard trails into griplesswonders pretty much signposting wheeled idiots into the trunks of waiting forestry.

I didn’t hate it. That’s too strong an emotion, but I wasn’t enjoying it much. Neither was the hardtail I’d selected as theindubitably perfect companion to three hours of mud wrestling. It responded by silently shedding vital transmission components far and wide into the deepestreaches of this dark forest.

A tipping point was reached where mechanical suicide of a chainring gave me the perfect excuse to leave the field of battlecitinga verified medical injury to my worthy steed. Which would have been fine. Lovely. Perfect. See you in the pub – not for me the infamyof a dishonourable discharge, I could instead sympathise with those having slogged a further 15km. While feigning disappointment at the cruel mechanical maladies preventing my participation.

I wish. Toolkits rolled out littered with spares of every description. A fewof which could be best summarised as ‘oh fuck, chainring bolts’. The mechanicaly minded fixed my bike for which I thanked them through clenched teeth. Back in the saddle, things improved a bit but only because we’d breached the FPFP** and any riding I managed had to be better than the shitty-scared stuff exhibited so far.

Some way behind the rest of the crew I couldn’t help noticing. I rode this very bike on these trails a few months ago with the sun in the sky and loved every minute of it. Not tonight tho, stiff, blind and confused – I’m just not well configured for winter.

Except it’s not winter. Since that night when even the pub failed to add much cheer, the rain has stayed away and the trails have responded with a last echoof summer hardness. I’ve been doing this long enough to fully understand that no deadline or parental obligations are anywhere near as important as heading back into the hills for one more perfect fix.

Not perfect. Pretty close tho. Malvern Hills looking mighty fine. Chilly but not cold, moistness in the trails manifested as grip not mud, feeling fit regardless of a hotel diet of bacon, eggs and beer. We stuck a couple of digits up at the fast coming night by starting two hours before sunset – a rather lovely phenomenon we chased homeon the last descent.

Between the two, hills were climbed, loam was middle aged roosted (I don’t really know what that means but jamming on the rear brake and sliding the bike into line for the next bend has to be called something), route options were considered, new trails were revealed. And all the time watching the darkening horizon.

No lights. Not interested in having something of the night about us. Winch and plummet for a happy two hours riding with someone with whom I have long had a friendship, a hint of competitiveness, an understanding he’s mostly faster than me and a vague level of maturity that I no longer care.

We parked bikes on a well photographed bench at the highest point of the hills and 1.5km from the cars. All downhill. Admired the sunset, congratulated ourselves on living in a pretty damn fine place beforefixingour sights due west onto that orb currently setting fire to the clouds.

I’ve ridden this descent a hundred times. And every time I pick a terrible line, give myself a scare, brake when I mustn’tand attempt to wing it when I really shouldn’t. This time I lost Martin 30 seconds in and my doomed attempt to make up lost ground had me hitting the ‘moon rock’ a little faster than intended.

A moment of silence. Just enough time for a full on retina download of silhouetted peaks cast with a reddening glow. Then the crunch of 150mm travel forks damping the danger of loose gravel. Fast, so damn fast – never wanting this to stop, but hoping the end comes one second before my ego out-rides my competence.

Done. Grin. Point at things. Make plans for next week while prevailing weather conditions stay fair. Wonder about last week. Work out that without the bloody awful, you’ll never appreciate the almost perfect.

Apparently there’s something important on the television. I’m watching the video behind my eyeballs. Nothing beats that.

*plans never survive contact with the enemy as the old military diktat states. Lesser known is the concept of ‘first intent’ where whatever happens you try and do just one simple thing. For the NHS it is ‘do no harm’. For me it’s ‘do no harm that might end with a jail sentence’.