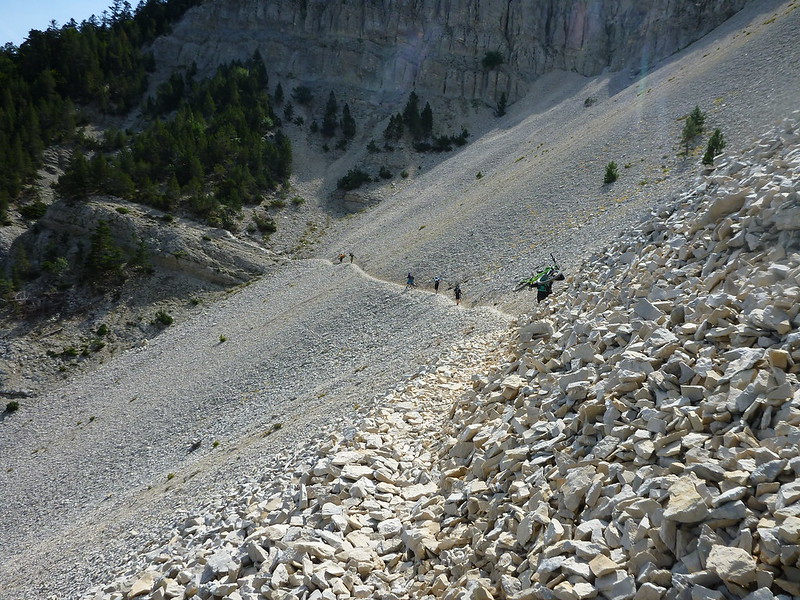 Mount Ventoux is a mutant. A geological freak dwarfing every other peak even in this land of rocky giants. Cricking your neck at the base tricks the brain into the false assumption that the tree level is almost perpendicular to the valley floor. It isn’t of course, this isjust a bloody big mountain.

Verified and validated by the 21 kilometre climb to the summit. Passing miles of lycra in various states of distress; from the whippet thin climbers etched with lactic pain to the weekend warriors slumped over the bars barely making any progress at all.

This was not our world as the van made swift progress with sturdybikes in the back and fragile riders in the front. Well not all of them; it’s times like this when I’m reminded of someone cleverer than me who intoned ‘Some people are more certain of everything than I am of anything‘. Most of the vans occupants looked relaxed, expectant or enthusiastic. Me? I was shitting myself.

Ventoux is not a pretty mountain. It’s shot blasted from glacial activity and there’snothing to detain you at the top. Other than faffing, sandwich making and, in my case, a desperation to get started. Or closer to finishing. It’s a zoo up there with bikes, motorbikes, camper vans and what I can only term ‘general vagrancy‘ as random individuals mill about in the heavy traffic.

Trying to be less random, we descended a couple of hundred meeting – nobbly tyres whumming in stark contrast to the stealth of our roadie brethren. Finallyabandoning them – amusingly – at a no cycling sign accessing a track made up entirely of shale and fear. First tho, we had to do photographs. Oh do fuck off, really? Yes really, social media is a voracious beasts and demands content even if at least one participant is clearly forging a note from his mum.

Finallywe rode. To the first hairpin anyway where Mike picked a line I’d already nominated as ‘assisted suicide‘ and somehow flipped direction heading back the way he came with barely a change in velocity. I consulted the risk/reward matrix and tripod’d round on two wheels and a shaky leg.

It’s not just the exposure.Which is pretty much constant. Or the danger of death if you fall. Which is sustained, evident and – unless one lacks an iota of imaginative thought – served up in a manner specifically designed to scare you shitless. It’s the endless technical challenges mocking your hard learned skills and veneer thin bravery. Mountains are relentless.

Having survived a few hairpins with a few hundred feet of ‘all body scrub‘ waiting for a single mistake, we dropped into a stumpy tree line which at least partially hid the horrors of a path hanging precipitouslyto themountains flank. Riding a littlemore of this convinced me the worse might be over and with itmy lemming like obsession with the edge. Go me.

Oh. That traverse then. On a trail- although that somewhat overstates the 18 inch wide path barely cut into a 50 degree score slope starting at the top of the mountain and finishing in the valley many hundreds of feet below – narrow enough that the only progress option was shouldering the bike and pretending nothing to the left was really very scary.

Then a climb to the lunch stop where a single slip would have been ‘Al’s gone, fetch the spatula‘ territory. While others hung their legs causally over the abyss, I pushed mine into the narrow dirt and my back into the ground behind. Funnily enough I wasn’t very hungry.

Should have eaten tho as the next two hours were a ride-push-ride-push on the endless traverse. Those in front were loving it- on their bikes, meeting the technical challenges with commitment and skills. Back in the cheap seats, I was barely managing 50% before hopping off an using my extremely competent bike as a crutch.

Had a word with myself. A few actually. Most of them were simply ‘fuck‘. Fuck the mountain. Fuck the exposure. Fuck my cowardice. Fuck Fuck Fuck, I’m am 48 fucking years old and I can’t fucking do this. That went on for a while before even I became bored of my own whinging by which time I’d fallen a long way behind.

Then I fell. In a supreme act of irony I’d refused to walk an exposed section, caught a pedal on the inside due to my clinging to the transient safety of the rock and flipped myself end over end down the scree slope. Four times I rolled; this is an accurate assessment because four times I counted the sky rolling past my saucer wide eyeballs.

Then it stopped. As did I. Surprised not to be accelerating towardsthe valley floor shedding vital body parts. Lay on my back waiting for the bike to hurtle past at terminal velocity. When that didn’t happen, decided to hang about for a bit longer while damage control checked in.

Not too bad. Shoulder sore but back protector and helmet had apparently saved important squishy organs. Climbing back to the track took a while giving me a first person view of exactly how steep the gradient of the mountain was. Could have done without that to be honest.

Dusted myself down. Got back on. Got straight back off and pushed for quite a long time until reunited with the my riding pals who clearly couldn’t see what the problem was. Remained very quiet because didn’t trust myself not to have a major hissy fit.

The rest of the ride was okay. I was pretty shit tho. Physically spent and mentally frazzled, I made excuses for my inability to ride stuff that’s well within even my limited remit. Wondered if this was a high water mark. Maybe I’m too damn old, too bloody scared, lacking theskills to ride this stuff.

Thought about that a lot since. Then saw the pictures and wondered how I’d have felt neshing out at the start. Realised there is still life in the old dog yet. Not sure he can be taught any new tricks tho.

Mountains are a brutal environment. Uncaring, wonderful, terrifying and beautiful. They strip you bare and fill you up. Emotions fluctuate from joy to terror. Only high places make you feel like this. You have a choice. Don’t take the easy one. You may never get the chance again.

*this was my response to the trail pointed out very early on. It was a phrase I revised many times during the rest of the day. I could be heard muttering ‘pineapple, pineapple fucking pineapple’ whenever the exposure was cranked to extreme. Which was pretty much all the time.