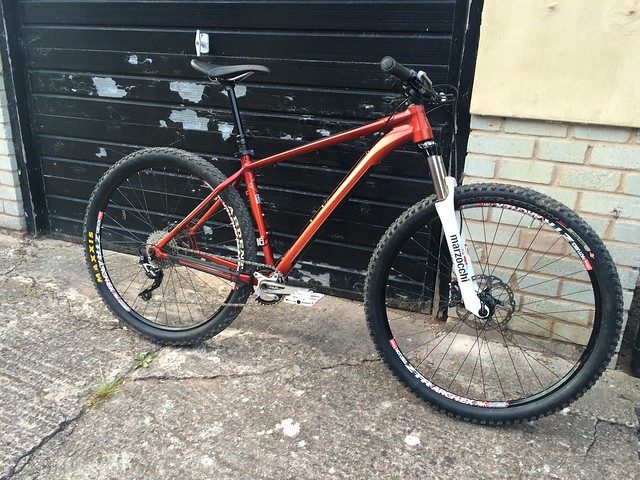 Years ago when I had a proper job, a very earnest young engineer rushed into my office to explain how light – the very light coming through mywindow – could be multiplexed, sliced, diced and repurposed for transporting ones and zeros at unfathomable speeds. Speed of light – obvious to him maybe, I was pretty much winging it from ‘hellomynameiskeithandhthisisveryimportant‘.

Mountain biking appears to be going to same way. We’re splitting niches at an atomic level, so no sooner have my most recent two purchases been deemed heritage then even the marketingly trumpeted perfect wheel size isdenuded by something even more magnificent apparently. Suddenly Wave Division Multiplexing doesn’t seem quite so insane*

I’m thinking of this endless carving of phantom niches as the physical manifestation of ‘Peak Beard‘. I appreciate people have things to sell but you’re really starting to piss the rest of us off. Oh the new standard means a new frame does it? And new forks to go with it? Will my 2 week old wheels fit? No, thought not.

I grumbled my way into the shedofdreams the other day looking for reassurance that my pantheon of mountain bikes still represented something worthwhile. And in the manner of any man who has a sock drawer, I took to harvesting the oily contents of my extensive spares holding to create space for the detritus washed up invarious short term receptacles.

Failing to solve the equation of loads-of-crap – available space > 0, instead I was struck by the righteous vision that rather than toss decent parts into a dark corner, I could instead hang them off something a little more aesthetically pleasing. A quick inventory ratified my thinking; transmission, wheels, bars, stems and brakes framed a single missing component.

That’s what the Internet is for. The first thing distracting me was the colour. RootBeer Trek call it, but for a child of the seventies, it’s clearly a homage to the motoring icon that wasthe Vauxhall Chevette. The second thing was the price which – while being more than a small multiplier of a cardboard box – was intriguingly cheap.

Emails ricoshayed this way covering condition, use, issues and inside leg measurement of the current rider. While slightly odd to request personal dimensions from someone you’ve never met, this – for a man whose leg growth was first lost and then found in his arms – is vital. Large frames invite an interference fit between soft love spuds and hard aluminium. It’s a mistake you make only once.

A brief meeting ata windswept motorway services saw yet another bike anointed in the shedofdreams. Bit of spit and polish and the turd brown sparkled just a little. No getting away from the lack of rear suspension tho. My hard stance on no more hardtails has beentriggered by an increasingly soft back.

Riding is still pretty much okay. The next morninghowever is not. Standing up, my lower back gets up about half a second later and my knees sometime in the afternoon. There are volumes of TLDR shit written about how riding hardtails makes you a better rider; connects you to the trail; keeps it real, etc, etc.

Yeah whatever, get a shave beardie. Still before I could ride and hate it, first it had to be built. All the easy stuff I hammered together before handing it over to Matt breezily explaining the cranks didn’t really fit and there were big holes in the frames where I assumed some cables may need to be inserted.

I provided beer and an extra pair of eyes as stuff pinged to the four corners of Matt’s amusingly chaotic garage. Soon we had a bike that mostly worked and a rider who still wasn’t quite sure why he’d bought it.

Maybe I’m sticking it to the marketing man. The latest version of the Stache (that’s what it’s called. No I’ve no idea either) is dripping with new standards and irrelevance. Mine from all the way back to 2011 is none of those things. It’s two triangles, some funky hydroforming and a load of second hand parts.

It’s far better to look at than a box of spares. It’s conveniently the colour of winter. It may get ridden more than the other 29er hung on the wall, and ignored since the Aeris turned up. If not it’ll bolster my real mountain bike credentials. It’s like Alfa’s for petrolheads, every proper rider must owna hardtail.

Even if he or she doesn’t ride it. Looks better than a battered box though doesn’t it?

* it is a real thing. Incredibly important in our digital world. Cornerstone of an exploding digital age. It also allows those on the near end of the autistic spectrum to play with lasers. I’ll leave you to decide if this is a good trade-off.