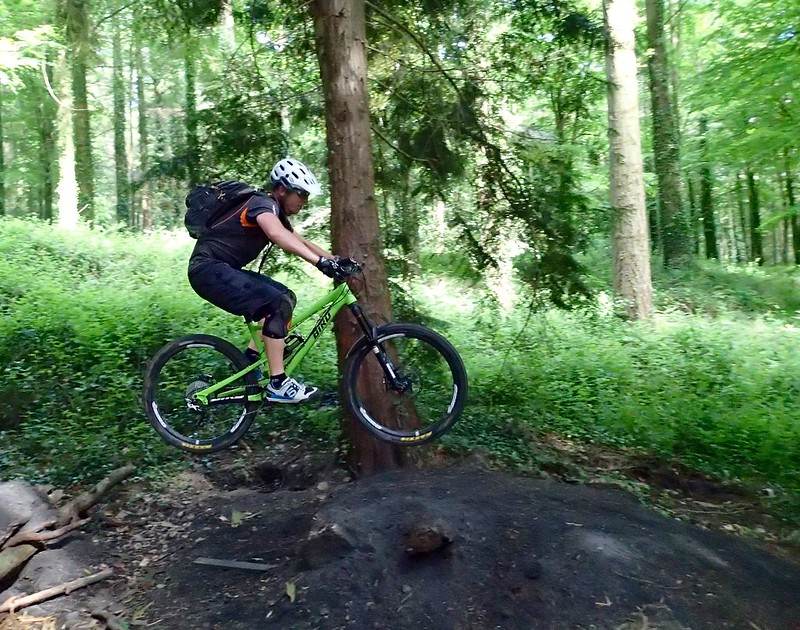 In this case it’s my friend Cez whose picture upthere writes the thousand words best summarised by’it’s not about the bike‘. I promise you fewer to frame six weeks of new bike ownership riding over six hundred kilometres with a vertical profile offifteen thousand metres.

The latin root of Aeris is simply ‘Air‘ -a place this bike is significantly more comfortable than the old fella riding it. Not in Cez’s case obviously where he’s thrown it over that gap jump with the kind of wild abandon 100% missing from my bravery repertoire.

However even working within thismore limited riding envelope, ever wider apertures have opened up of what a great bike/average rider hybrid can achieve. The Aeris isn’t one of those Rottweilerbikes giving it the ‘grrr, go on bite it, grrr, faster, chase it, eat it’ which insist on 100% commitment 100% of the time. You know the sort, it’s all absolutely new and splendidly brilliant right up to the point when it isn’t leaving the trail splattered with previously usable body parts.

It’s more like the quiet member of the band – say the rhythm guitarist – largely ignore-able but oozing competence and ensuring the player looks pretty damn awesome. Until you start to push it a little bit when it gets a bit hairy’n’lairy, stomping on the fuzz pedal and bashing out some Hendrix riffs.

No devil on your shoulder this, more a good mate gently suggesting ‘you’re fine with that, c’mon we’ll do it together, trust me, it’ll be great. And it has been, clearing my biggest and scariest ever gap jump (but not that one above), punched out quite a few Strava PBs on trails I’ve ridden 100s of times and conquered a couple of obstacles made impossible by previous excuses.

It’s not a game changer tho. The PBs are seconds at best, the scary stuff is still bloody terrifying, the gap jump had me all wobbly legged before and after. But this is quite a bike Ben and the boys at Bird have built; long front centre, slack head angle, low bottom bracket, aggressive stance. Stable and composed at speed, lithe and carve-yin the tight stuff. Climbs well, descends better. Small margins maybe, but margins all the same.

As a trail bike, it’s hard to find fault. The rear shock is a thing of magic delivering climbing grip and descending confidence. The forks aren’t far behind masking my ham fisted-ness and inappropriate braking. Rims forged from carbon are ridiculously wide and stiff bulging out tyres at 20 PSI. Brakes are personal wall and everything else just works brilliantly.

In those six weeks, I’ve dragged it up the Malvern hills, pushed it round a thousand corners in the Forest, chucked it down Cadair Idris, barrelled it through the Quantock hills and giggled my way around four trail centres. And for most of those rides, I’ve pretty much forgotten about it while enjoying the scenery flash by a little quicker than previously.

For balance it’s not perfect. The slingshot cornering is delivered in part by a very low bottom bracket cranking pedal strikes on anything vaguely lumpy. The finish on those carbon rims is pretty ropey. And, er, that’s it. Any other problems just call up Ben or Dave for a quick chat and find yourselves 30 minutes later sort of understanding how suspension works. 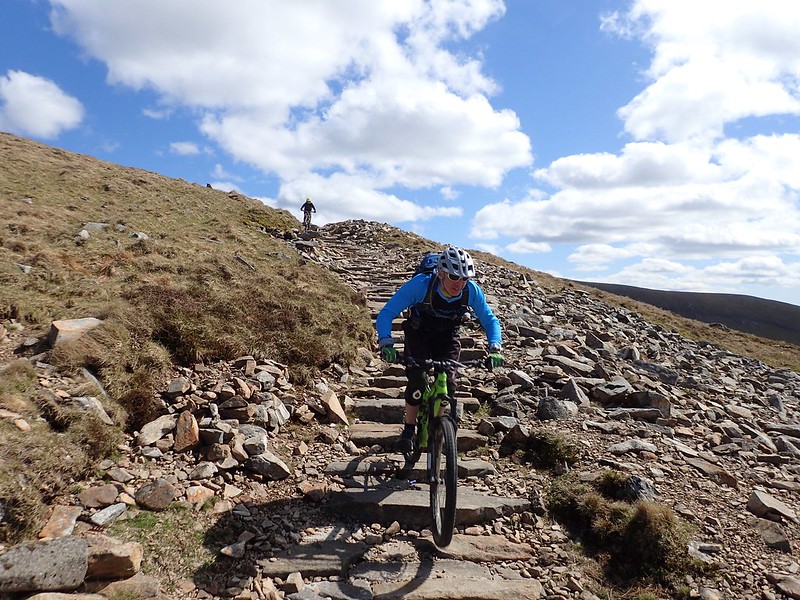 Half way down these steps on Cadair Idris, it became apparent I’d bought a bike that both suited and encouraged me. I’m still stuck with those mental hangups and physical frailties which ensure this bikes’ capabilities area million miles from my own limits.

That’s not really the point tho. Do I take a moment before every ride to savour how bloody good the next few hours are going to be? Do I stay the worry overcertain obstacles which normally have me reaching deep into the excuses bag? Do I just want to ride, ride and ride just a bit more? Damn right I do and that’s not the result of a quantitativeevaluation of angles and other supposedly important metrics. It’s riding as fast as you dare whilepassing silent thanks to those who understand better than you what constitutesan amazing mountain bike.

In these six weeks since the two big bird boxes arrived on the doorstep, the Pyga has languished dustily in the shedofdreams. My plan was to compare it to the new incumbenta month after tarnishing the new bike glasses. It hasn’t happened and I cannot see when it will. That doesn’t make the Pyga a bad bike at all, it just makes the Aeris a really bloody good one.