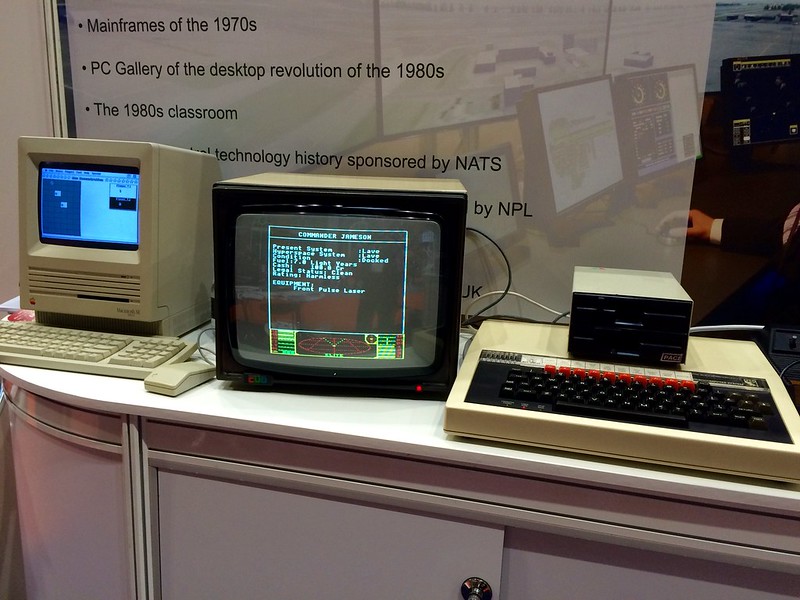 That phrase and this picture are only going to appeal to readers of a certain age. That age is mostly forgotten – sandwiched between basement sized, punched card munching transactional monoliths, and the birth of the Internet which swept in a digital generation to whom an App is a nicely rendered icon of usefulness accessed with a cursory swipe.

Kids today eh? Back in what was laughingly referred to as the ‘information age‘, the pioneers of micro-computing had broken out of crusty data processing rooms – largely filled with massive multi-million pound suites of humming electronics knocking out the power of todays $200 smartphone. We’d swapped lab coats for mullets, terrible jumpers and trainee moustaches. Nothing worked. Everything was custom built. Soldering irons were mandatory. The vanguard of personal computing in the late ’70s and early ’80s was not a place for the faint hearted.

Ah we may have missed many things, but what a time to be a geek. Nose pressed to Tandy’s windows** excitingly pointing out the cutting edge of mobile computing. In a historic marketing event, Osborne honestlydescribedtheir suitcase sized solution to small data a luggable rather than a portable. And every month a new funny shaped keyboard appeared, running some operating system knocked up in a bedroom just like ours.

No big vendor owned the market. There wasn’t really a market to own. All sorts of weird stuff made it into production, and of course none of them would talk to each other. Turf wars were rife, were you a ‘BBC Man‘ or one of those ‘Plastic Spectrum kids’? Which led to some of the most pathetic fights ever ‘Ooooh that ruler REALLY HURT‘.

Anyway I digress. Up there in that tiny little screen,almost hidden behind a massive keyboard, was the seminal micro computing game. It represents many things; an amazing technical breakthrough creating endless worlds in bugger all memory; real graphics of the vector variety drawing you into that tiny VDU,and about a year of my life.

Elite was a truly amazing bit of software. Not that we called it that back in the day. It was a game you spent about 20 minutes loading off a disc drive with as much storage as a single contemporary message thread, and in no time at all you were deeply immersed in deep space trading your way across an infinite galaxy.

None of this linear gameplay which pretty much defined 99% of what passed as passing time with rubbish computers. Smuggling, bounty hunting, smart trading – all of these roles were yours to choose. And with it being an entirely internet free decade, the concept of on-line gaming was more having a few mates round taking turns on the keyboard.

It looks rubbish tho doesn’t it? Well it is 30 years old, and we should all reflect how much better we presented ourselves back then. Having encountered this National Computer Museum working exhibit at a dull trade show, I was desperately keen to reacquaint myself with my lost youth.

I didn’t tho. We all know what happens when you meet your heroes. After a year of frustration attempting to earn my ‘elite‘ rating, the early thrills of mere survival were long behind me, and my ship had more upgrades than the bikes now hanging in the shedofdreams. Eventually I drifted off to other pleasures which has never really included playing games of any vintage.

Apparently gaming now is an older persons pastime. Mid 30s is the sweet spot, or – as I think of it – still pretty much in short trousers. And while I’m happy to piss countless hours away on Internet forums. the prospect of a virtual shoot ’em up doesn’t hold much interest. Even the brand new – and apparently epic – version of Elite isn’t something I want to be involved in.

Heady days my early teenage years. Messing about with acoustic couplers and teletype terminals. Put me on a path I’ve never managed quite to fall off. It’s all a bit easy and yet somehow hellishly complicated now – ensuring myapproach of treating all technology as essentially elven magic serving me well.

Still wish I’d had a go tho. I’d have happily spent a few desperatehours to earnthatlow resolution message flashing on a rubbish screen praising my piracy prowess. “Right on Commander” indeed.

It was no Angry Birds. For which I’m rather sentimentally grateful 😉

* and it was all men. Well boys really. But no woman. Strange really considering that cohort of young gentlemen fiddling with their ram packs.

** not a euphemism. More an electronics emporium,