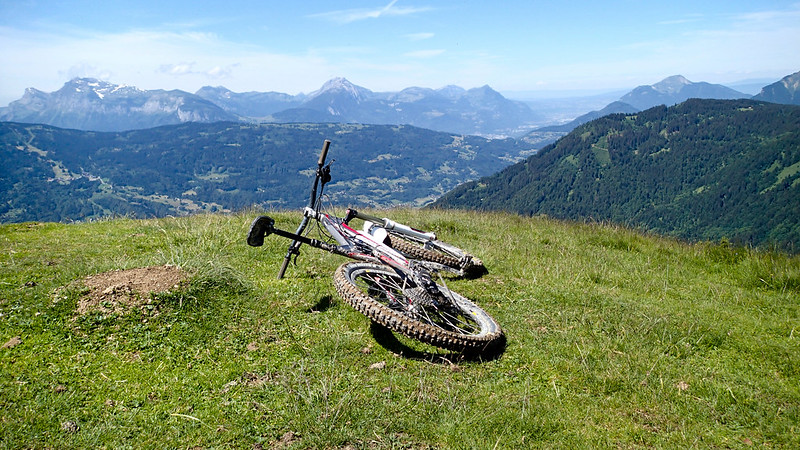 Had to happen. Too many bikes, most of them very similar and one of them not going to get used now the new shiny thing has arrived. Financially the Megaisa basket case – was meant to be a cheap build, but predictably ended up draped in high end bling. Not ridden that far or that often, so dividing the 2nd hand value by the miles covered would result in a number you could comfortably run a Chieftain tank on.

That’s not the point tho; the places that bike and I shared and the experiences we had are pretty much priceless. I liked the Mega already having ridden it locally and at a couple of trail centres, but after a week in the alps, I just loved it. It’s so much more capable than I will ever be, which normally makes bikes like these a bit dull to ride at slower speeds.

Not that one. It was fun everywhere with it’s super fat tyres, awesome BOS forks and a whole load of lightweight but sturdy kit finishing up a bike you could ride up hill all day, because you knew how bloody brilliant it’d be when you cashed in those gravity credits.

Split into individual components would have returned more of my investment. But breaking that bike up felt like the wrong thing to do; it needed to go to someone who has the space, time and aptitude to get the same or more enjoyment thanI did. It’s not going to provide that in pieces, nor hanging on the wall in shedofdreams(tm).

So today I’ll be packing it up and sending it on to a very nice fella called Mark who was unlucky enough to lose his two bikes through theft. He tells me it’s going to be going back to Morzine, which makes me very happy.

So it’s lasted fifteen months in my ownership. But hardly been ridden in the last six. I’m kind of sad to see it go, but I’ll be glad it’s gone to someone whose going to use it for how I built it.

Well is this the rationalisation I keep talking about?Solaris sold three months ago and the Mega goes today. I’m down to two mountain bikes. That feels about right, but not a little worrying. Maybe I need to chase a new niche; what are those fat bikes like?