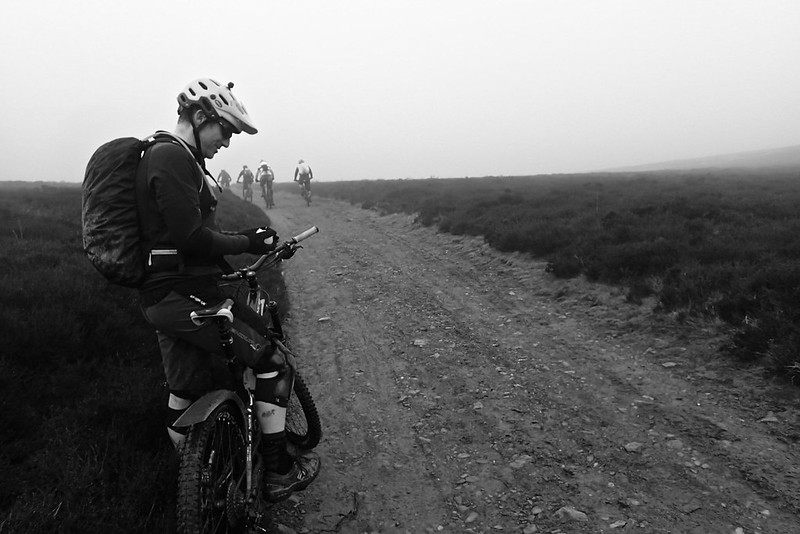 Moments make a ride. The drudgery of winter riding is elevated by stuff you’ve slogged for everto experience, and experiences which are much shorter lived but splendidly fulfilling.

Language generally provides context. Examples abound; peering into the 8/8ths clag hiding fantastic views and delivering instead only freezing conditions, Rex rolled out of the mist to declare ‘this would be a properly shit day if you didn’t have the right attitude‘. We had that alright, and cake. Lots of cake.

And then many tired revolutions later, when a thrown out warning intoned’Cez has engaged downhill mode on his Orange Five*, stand well back‘ , drawing the rejoinder – quick as a flash – ‘What? has he removed the bottom two drawers?’leaving our little, shivering group incapacitated with mirth. 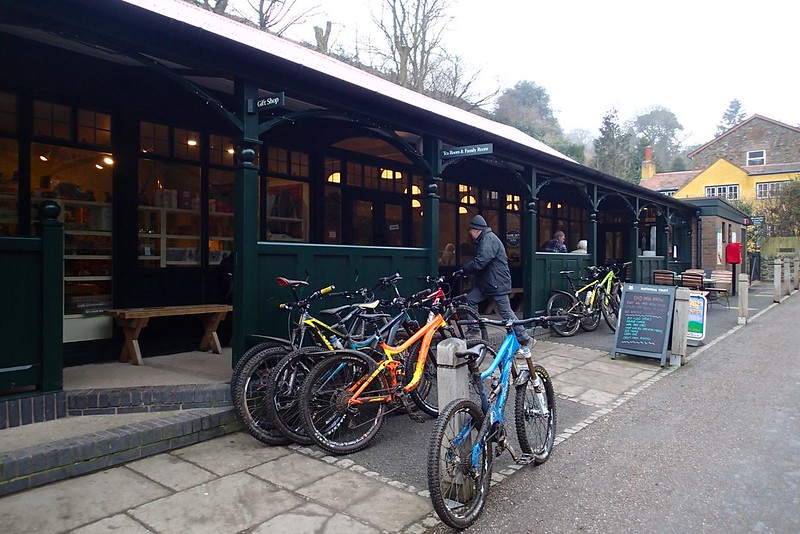 (the filing cabinet at rest)

Some of that tiredness was nothing more than repeatedly attacking the loaf like geography of the Long Myndin some kind of eight man pincer movement, it’s a Malvern-esque lump with steep ups, fast downs and bugger all flats. Not made any easier bythe endless mud composted by farm vehicles andincontinent sheep.

Quite a lot more was entirely attributable to our inability to convert fuzzy digital pictures to the tracks on the ground. To be fair, we were actually lost some 100 yards from my house when I directed Matt on a short cut to Hereford as requested, but missing the wider point that Hereford was inentirely the wrong direction.

Predictablyour lack of navigational triumphs continued with an aborted breakfast stop peering through the closed, darkened windows of a much loved cafe, and a confident vector inscribed by muddy middle digit which dropped us beneatha hill we were due to climb. Strangely from this point on, my route finding based on a hypothesis of ‘it all looks the same in the fog’were largely ignored. Probably for the best.

Best to get the push out of the way early on eh? I rode a bit of it through the medium of geographical embarrassment, before joining the earth bound misfits slipping and sliding up a wet, grassy steep encumbered by bicycle. They said it was fine, but I could feel the hate. 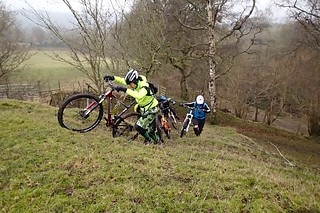 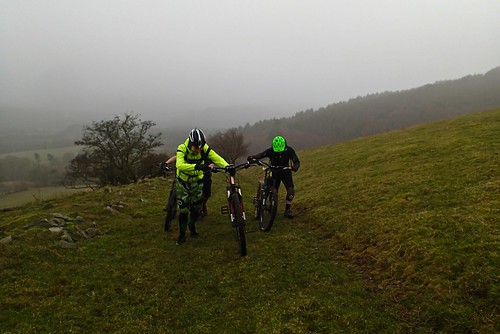 Things improved as the easy track, missed early on floated out of the murk, while suggestionsof ‘there’s a lovely view all the way to the sea there‘ were largely ignored as the enigmatic eight peered into freezing fog, and hunted for these mythical descents hidden from us all.

Took us a while to find it, but it was entirely worth it. A blast down increasingly steep switchbacks allowing all sorts of things to hang out, especially for those of us rocking the elixir of endless grip that is 20psi tyres inflated on fat tubeless rims. 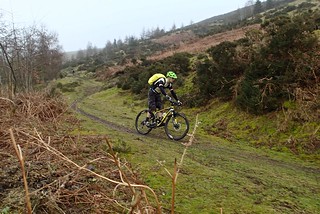 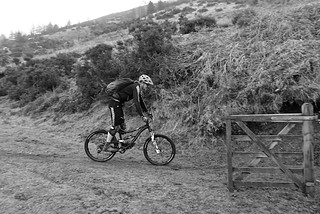 There’s something sort of important here; not about tyre profiles or pressure or stickiness, but the stickiness of those who’ll slog up a horrid climb for 30 minutes or more to access 120 seconds of potential injury. It’s fucking stupid and that’s why I love it.

I didn’t love the next climb quite so much as it meandered under the muscular shadow of the Mynd, traversing this way and that before pitching upwards on a double track full of sheep shit-apparently designed to suck the joy out of everything.

We got it done eventually via a shivering snack stop taking in a view of cumulus clouds at zero feet above sea level. Finally topping out, I felt a joyous statement was entirely called for. My plan was to arrive at great speed hanging off the rear brake in a skid parody remembered from my 9 year old self, before spinning about 180 degrees so scattering my now panicked friends.

Plans eh? Never survive the first contact with the enemy. Started well, the swingarm flicked out and began to slide in a rather pleasurable way right up to the point to where that fat, grippy tyre found something in the wet grass to adhere to. Suddenly we’d gone from amusing skid to terrifying tank slapper and my immediate future had a face plant written all over it.

Somehow – and I feel confident in declaring that we shall never know quite how – my un-athletic frame took fright at the imminent ground-nose** interface and hurdled the bucking top tube with some alacrity leaving me just to deal with 20KPH kineticenergy being unwound by10KPH legs.

I went with insouciance. Desperately running like a man wearingseven league boots while still finding the time to punch the air in the manner of an individual who has completely thought this manoeuvre through. ‘Do it again for the camera‘ they said as the bike was flung over my head and into fogbound damp heather. I declined on the grounds of no one could ever get that lucky again.

Instead we discovereda little more perilonthe descent – eventually because again we were lost – leading back into the valley. Interlocking, glacial spurs abound here and the simplest method to follow the ancient route of icy glaciers is atight, steep singletrack hanging off the side of a virtigous valleys. Committing, technical, slippy but basically fun if you avoid an arse-over-tit plunge onto the flat ground many metres below. 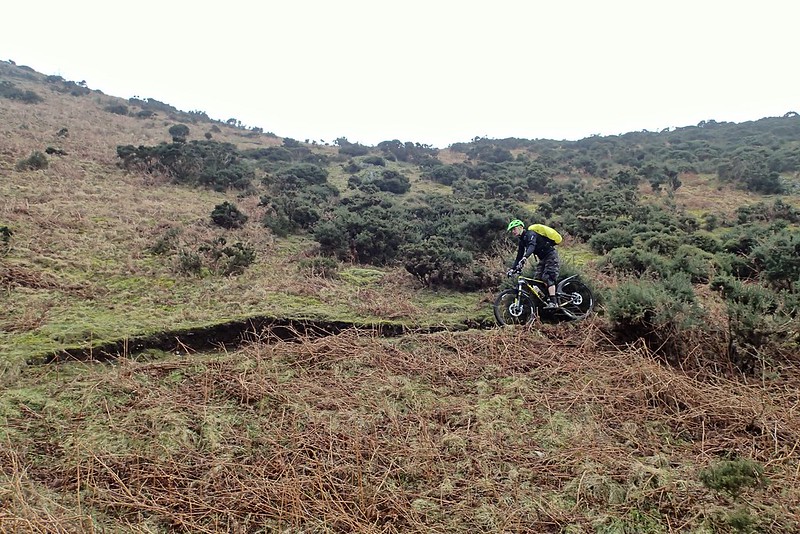 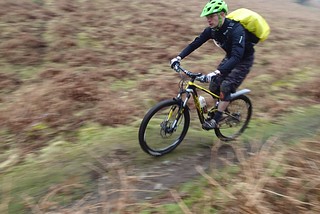 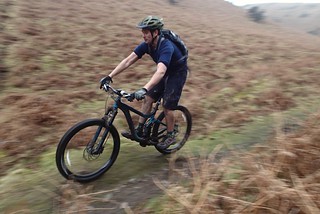 Nofun onthe next bit as we climbed back up to civilisation in the form of the National Trust Cafe at Carding Mill. Where I ate my own bodyweight in cake, added an extra layer and pretended I didn’t know what was coming next. 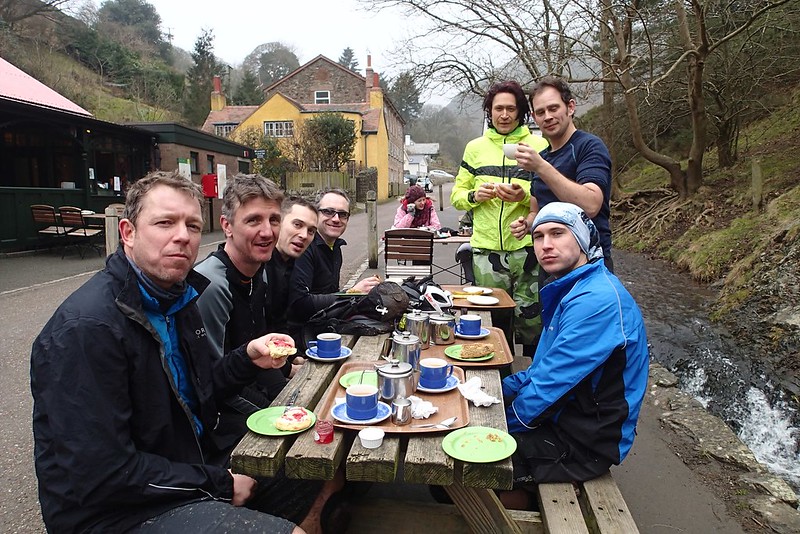 It still came tho, a 300m climb out of the valley on a track somewhere between ‘quite pleasant‘ and ‘absolute bastard‘. I rode most of it which mostly did for me, although Mike rode even more rendering him supine and breathing like a man only recently introduced to oxygen at the crest. 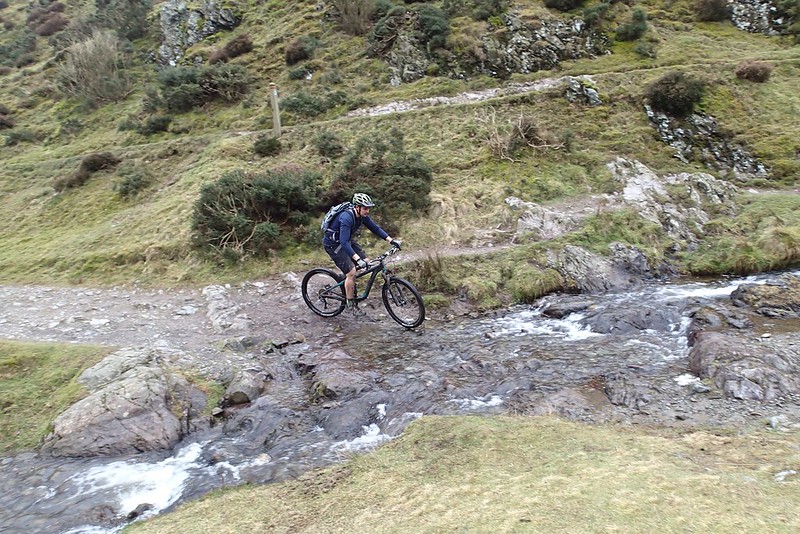 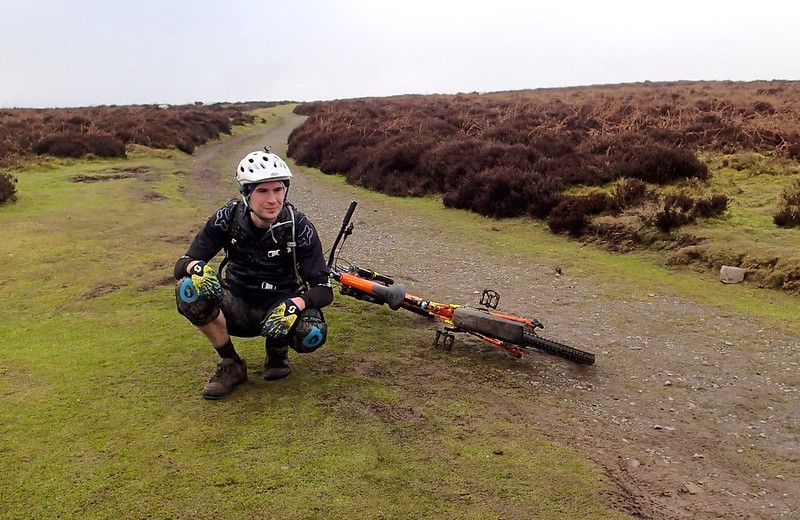 Another 5km of what could charitably be called undulations, but I’m calling out as endless climbing, delivered us to a still snow bound road solving a simple navigational challenge to the last descent. So obviously we got lost. Twice. Once because the rather cynical cycling group refused to follow my directions, and once more when they did. 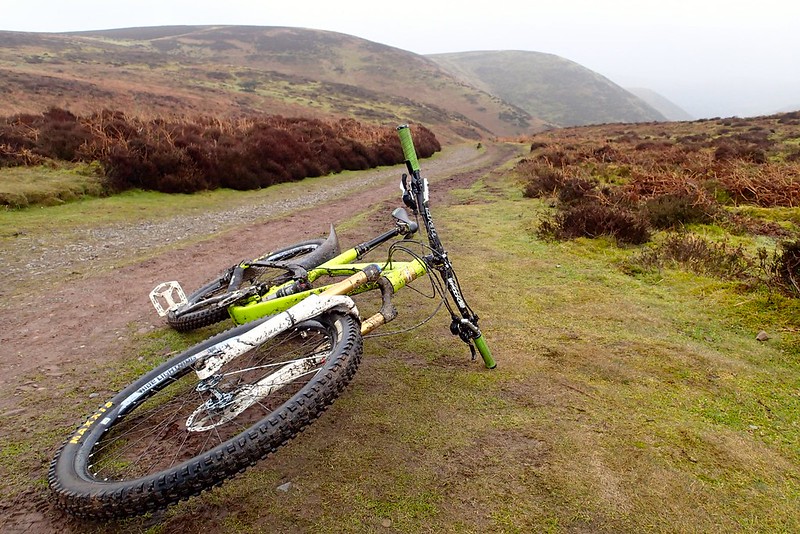 Somehow we fell into Minton Bach which is a lovely way to go home. It hangs precipitously off the side of a sodding big hill, weaving in and out of exactly the kind of natural geography which makes you think ‘Trail Centres, Why the fuck would you ride there instead?’

And because it’s not bench cut, or drained or armoured with stones, this time of the year it’s slippy, difficult, committing. Not technical really, but big consequences if you stray off line. Three minutes of nuance to the square root of fuck all – be good or back off, be brave or make excuses, be scared but do it anyway. The thing that separates me from you is pretty much this.

Not that I was fast, oh no the quick boys disappeared with what I can only think of as a lack of imagination, but on reconvening in farm yard encrusted in the liquid poo of a thousand large animals, there was shared understanding of why entering the grim is almost always worth the effort.

Hungry work this winter riding – arriving home I ate everything in the fridge until there was virtually nothing left. Only Carol’s intervention stopped me devouring the light at the back. Then I sat down with a beer and processed fifty photographs of cold looking people peering into a fallen down sky.

And at no point did I think ‘well that’s a waste of a day’. Looking forward to Spring, looking back at winter with a grin and a giggle.

* Nice bikes, unapologetically industrial. Quite noisy when descending. Oft likened to the cacophony unleashed when a filing cabinet ishurled at a metal fire escape propelled by a Saturn V booster.

** A nose like mine appears to have a Darwinism lineage to the first plough. I’m considering hiring myself out come planting time.