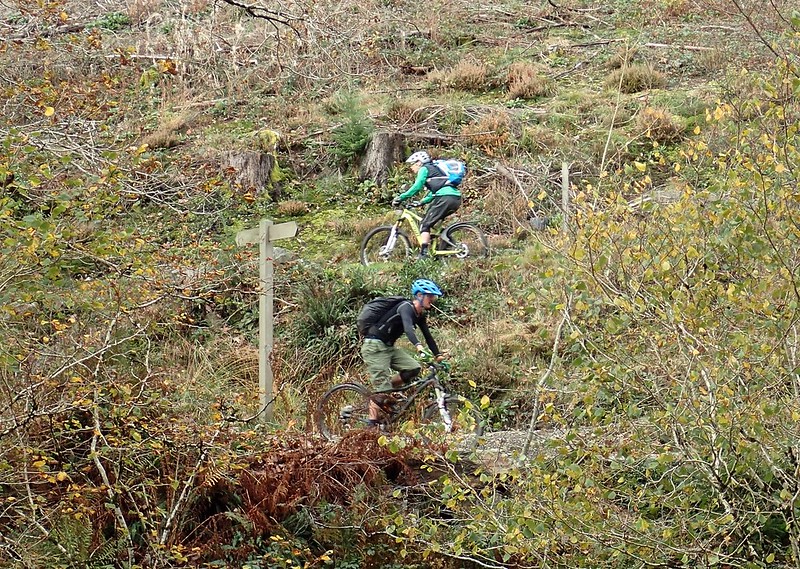 In a time best thought of thedistant past I wrote an article on the practice of Yoga and why it’s not entirely relevant for the approximate half of the population whose idea of self-reflection is scratching their bollocks in a post modernist fashion.

The past is a different country; they speak differently there which somewhat explains my current mild obsession with stretching muscles without lifting weights in a long term goal of flexibilityand a rather shorter one of standing up in the morning without clicking, creaking and exposing the kind of noises provoking the neighbours to call the RSPCA*

Not Yoga tho. I’m just too much bloke and not enough lentil. Pilates is a bit differentwith Carol and my youngest who cheats with longer arms and a body not ravaged by age, injury and abuse. She’s not idea how lucky she is right now. And obviously there’s no point in explaining such a thing to those having never known any different.

Which bring me nicely to trail centres. It pains me to realise than my extreme antiquity shields the truth of the young and innocent failing to understand that winter is actually a quest of the worthy snorting mud and mainlining an arse of liquid crack while pretending they might be enjoying themselves.

Which is absolutely fine for the hair-shitred amongst us. There’s a certain purity in endless death marches under slashing rain skies on trails once fast and hard but now basically under the water table. You feel fantastic. Afterwards. During the ride? Not so much. Bit this is proper four season mountain biking. There is no wimping out or whimpering. Others may be weak but you are strong in the face of drudgery, broken transmission and inevitably broken spirit.

Two weeks ago we broke ranks and headed for Wales to ride nothing but trail centres. The distant wild hills called and we gave them a nostalgic wave before forgoing navigation for stump based arrow and armoured trails. 3 Days, 3 trails and if I’m admitting a guilty secret it was nothing short of magnificent.

We were lucky with the weather which when you’re deep into North Wales in late October suggests you’ve not been hailed on. The rain came but by the time it was pissing down we were ensconced in a Halloween theme pub entertained by a band mostly differentiated by one man playing every instrument from guitar to accordion and the other wearing a pumpkin on his head**

Returning to the kind of climatic conditions November brings spiked my motivation to ride in such a way, I entirely failed to fetch the bike from the barn for the first time in a planetary rotation. The thought of slogging through muddy natural trails had the appeal of crushingone love spuds in a sharply contoured drawer.

Night rides came as did the rain and my non attendance passed but the shitty weather turned up in my stead. Eventually tho the need to ride trumps the inertia of wondering if it’s worth it. Circumstances predicated a two hour window at Swinley Forest where i’d cut my singletrack teeth many years ago and has recently been upgraded to a proper trail centre.

Hmm. Based on traffic and politics, all the heritage trails have closed notices stapled to trees whereas the new blue and red runs are vigorously signposted and marketed. And they are absolutely fine displacing the lack of elevation with seemingly endless switchbacks though pine forests and the occasional 30 second non pedally descent.

Something is missing tho. I slipped out of the matrix and headed out on vaguely remembered trails now marked illicit They were full of puddles, slick roots and unsustainable cambers. And I loved them more for that. I’d rather splash through something like that than dissolve brake pads on a cipher for a much loved trail.

This isn’t me having a pop at trail centres. Nor that the demands on somewhere like Swinley drove a hard decision between something official and nothing at all. Nor am I am denigrating the joy of 4 season trails perfectly designed for mass traffic and shit weather. Not at all, come Sunday I’ll be back at another one.

I guess it’s something a little more nuanced. My plan to ride Swinley was simply the displacement of a head full of much stuff to be done. Perspective guaranteed, to do listsaxed, real-lifte(tm) reasserting itself. Everything I get riding a mountain bike. And I got none of it switching back on scalexric tracks and wondering if this is how the end starts.

Sure the blood was arterially pumping. The trails snaked out in all sorts of interesting directions. The bike was willing and ready. But the rider had a head full of angst entirely failing to me wound out by the cycle of pedalling. It was okay, fine, sort of good but it wasn’t quite enough.

I love trail centres. If they are in Wales. Or Scotland. I get that but the idea of building a centre in a place where 25km delivers 200m of elevation you’ve got to think what the hell is the point. The point is of course political – too many riders chasing illegal trails on someone elses land. Armoured trails are the answer.

* because no sound like that which resonates through a wall can be in any way human and must suggest bad things are being inflicted on innocent pets.

** this is North Wales and such things pass as entertainment.