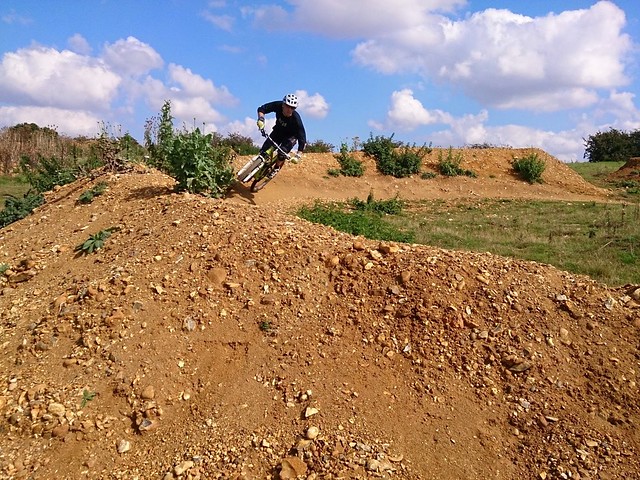 As a blokey bloke – unreconstructed or not – there’s a certain amount of sacramental reverence around skills and abilities way beyond castigation. Lines over which even banter ‘shall not pass’. Clickbait lists are generally required at times like this, so let’s start with: driving, sexual performance, quaffage coefficient and being able to ride a bicycle.

It’s an interesting list because we are taught to drive, sex is something we learn through experimentation or repetition, alcohol poisoning about the same but remaining upright whilst mostly in charge of a bicycle draws a straight line between skinned knees and useful manifestations of centrifugal physics.

Which, when you consider the importance of grasping the basics, and a bit more when accelerating through hard edgedgeography, feels like an educational oversight. But being chromosomically doubled*, we’re not interested in making the best use of our tiny talent when going harder, going faster**, going to be braver, going to end up hospital is somehow more highly rated on the achievement scale.

Over four years ago, I had a riding reboot which rocked my little mountain biking world, right up until the point I forgotalmost everything.Since then I’ve mostly survived, dodged the occasional bullet while more frequentlyadding to my extensive legions of scar tissue. I’ve ridden too many crap lines, watched too many expert videos and read too much nonsense on the web.

So now my approach to any kind of riding difficulty is a multi-tasking mashup of many techniques, none of which I can reasonably execute. There’s so much going on in my head, the obstacle has long passed before any mitigation plan has been enacted. Result of which is mostly me viewing that trail difficultly upside down and long separated from my blameless bicycle.

Twice in the week before a return to the skills shrine of Tony, I’d crashed hard and painfully on dry trails with limitless grip. Bring on the winter and my riding gear would probably be a body-bag unless something changes quickly. An adverbthat’s pretty much exited stage left from my riding world, with people I used to easily chase only becoming visible waiting at the end of the trail.

Time to man down and accept scratching my riding itch isn’t going to make it any better.

Tony’s upgraded his training facilities quite a bit since my last time in his care. Now he’s snaked trails between the frankly terrifying North Shore planks elevated halfway to the moon, withlines of jumps angled to propelyou there. He’s paired back his coaching as well to about three physical moves and four mental ones. The coffee remains both strong and most welcome after more than a three hour drive.

I like Tony. He’s got a interesting view on life , and lives itlike an amped Hippie with no off switch. I may not always agree with him, but any conversations are anything but dull whether it be bikes or absolutely anything else. And from a coaching perspective, he is a bloody genius.

Two minutes in, he’s nailed my inability to commit to left hand turns (large scar on knee to be taken into consideration), Hadyn’s slightly odd body positioning and Rob’s rearward stance. And that’s just riding round a couple of logs. Soon we’re lobbing ourselves off little drops, and giggling through elbow low carved turns. After that it’s berms, singletrack, drops, tabletops and gaps jumps.

All of which we dispatched. Six foot gap jumps with hardly any effort. Corners railed like you’ve failed to match on a million MTB videos. Berms accelerated out of and drops nailed without the excessive body movement and bar wrenching that passes as a big part of my MTB repertoire.

I even re-learned how to bunny-hop. Hadyn launcheda 12 foot gap jump, and Tonyturned Rob from an XC scardycat into a gap jumping monster. And that’s all you’re getting in terms of the process because unless you go through it, describing words are merely going to confuse.

What’s more important is can you translate a single days epiphany into a trail vocabulary writing extra speed, more smoothness, some safety into your every day riding?. That’s a firm yes and a more than occasional no, Once cut free from the cord of what feels right, you can practice, embed muscle memory and even switch back to flats but when things get scary, the inevitable happens.

You regress. You seek solace in the habits that somehow kept you safe when the going got tough. And these are bad habits, dangerous ones, dropping a shoulder to the inside, moving your head back from the scary, forgetting your feet have a part to play riding downhill. The difference is you know it’s wrong, it feels horrible and forced, slow and difficult, desperate and daunting. So you back offa littletotry andfix it. With some but not unlimited success.

So is a day’s course going to turn you into some kind of riding deity? Well, no clearly because there’s only so much skill than can be squeezed from very little talent. A better question is does it provide a simple set of physical and mental techniques that – when combined – have you riding old trails in an entirely new way. Yeah, pretty much.

There’s a tiny five foot gap on a trail we ride almost every week. And I avoided it for two years on the reasonable grounds of it having not much ground between entry and exit. Three days after spending one with Tony, Rob and I sailed over it without a care. We avoided the ten and fifteen foot gaps further up the trail but you have to start somewhere. And – in my case – work down.

It was a fantastic day with Tony. Rebooted my Mojo, Gave me a go-to place for doing to the right thing. Reinforced the delusion that I can keep getting better. Provided the confidence to ditch my SPD’s and let the flat-earthed fella out. Made me smile, grin, giggle and laugh remembering how bloody lucky we are to ride mountain bikes.

For that alone, it was more than worth the money. And I’ll be back because backsliding is pretty much my modus operandi. I won’t be leaving it as long this time.

* this is typical man. We have more than women. And more is better, yes? Well not really as it clearly blocks any ability to multitask, or garner sufficient empathy to understand not everyone thinks breasts are the most important aspect of those with just an ‘X’.

** Except you’re not. You’re more frightened. That’s something entirely different.