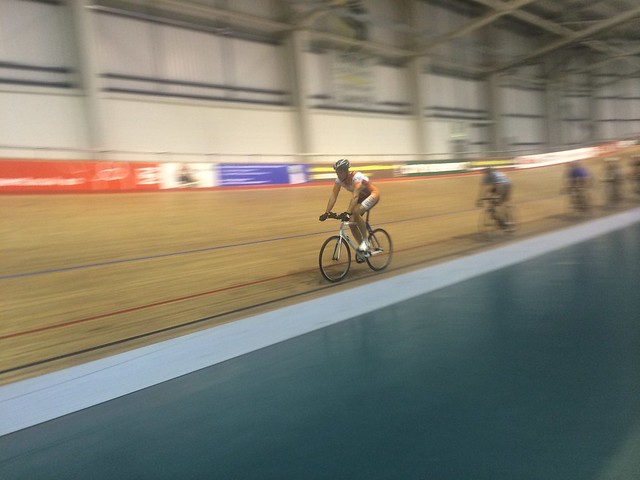 .. so said my medal winning mate Jez,, as I hung desperately onto the barrier waiting for my lungs to serve up a little air. I’d raced* 500 metres flat out therebyrendering myself pretty much flat out and needing someone to help me off the bike. So I could be sick in said bin.

Wasting wordsexplaining thatMountain biking isn’t like track racing would suggest you’ve never ridden a bike. But it’s absolutely spectrum-opposed to the sophisticated suspension platforms dripping with stunning technology that I ride most days. It’s a stripped down aesthetic where it really isn’t about the bike at all.

There’s absolutely nowhere to hide on the track. It’s you, a simple bike with a single gear andexactly one less brake barrelling round a wooden edifice clearly designed by an individual who enjoys watching others suffer.

‘Two straights and two hills’was how the coach described it to me, whilst the previously-velodrome’d whizzed round above my head. As the only beginner I was an earth bound misfit pedalling gently on the flat concrete but still being bucked by the the fixed gear. Unlearning freewheels is pretty much a lost art for a man slacking off the pedals for approximately ever.

‘Relax‘ – was his further advice as wobbling and grunting wasn’t getting me round very fast – ‘andloosen your grip on the bars‘ . Are you mad, there’s barelyany bar to hangonto in the first place, soI’ll not be giving it the slightest opportunity to be wrested from my death grip.

Instead shining a mountain biking light on the prism of the unfamiliar revealed it was in fact two massive berms linked by some line painted singletrack. Now I get it – take a longer view, let the bike rail into the berms and push for speed on the straights, forget the freewheel and focus on being inch perfect on the black line.

Sufficient competence demonstrated, the coach sent me above the blue line and high onto the banking with a warning that speed was not so much your friends as the very thing that prevented gravity pitching you head first onto that concrete some twenty feet below.

Quite a rush. Quite hard. Mildly scary. 20 laps of this and I was bolloxed although my preparation of getting properly trolleyed the night before and following that up with a breakfast showcasing most parts of a pig, deeply fried, may have mildly affected my performance.

‘Not entirely dangerous‘ was the ringing endorsement by Steve the coachwhenI trembled to a stop. As I panted desperately on the rail, Jez was catapulted on a 10 lap time trial. Even in my oxygen starved state it was clear that men and boys were sharing this track as the human missile whistled past at speeds upwards of50km/hr.

So the nervous looking group now had a tail-end charlie giving them a friendly wave under a worriedexpression. Planting myself at the back was seeded by an evaluation of possible collateral damage. Worse case I’m taking a single rider out rather than busting the collarbones of the entire group after some inappropriate manoeuvre**

Great plan. Went badly wrong almost immediately as the next exercise was for the last rider to weave through the group, passing inside and outside of speeding riders. Honestly what could possibly go wrong for a man who has exactly 9 minutes of track experience?

Will carved through like an Orca about to take a Humpback calf while I hung onto the back of the group wondering if everyone had sufficient medical insurance. An internal dialogue cut short as Steve whistled me through and i stomped hard on unyielding pedals breathlessly shouting‘inside, outside, am I clear’whipping through the group on my heart rate limit and then some.

Riding high onthe banking is so much harder and I was mostly a broken man with the final‘outside‘ pass. Still no one t-boned whichis the sort of challenge to my mate Martin loves who – over the last six years – has picked the most inappropriate places to overtake on trails which suggest that someoneâ€™s going to end up in the shrubbery. Or the hospital.

Normally I’m happy to fend him off with a 780mm mountain bike bar but today he dropped in unannounced from five feet above and nearly collected my front wheel. ‘You have to communicate‘ shouted the coach to which I responded‘Arrrgggghhhh he’s trying to kill me‘ which I trust made the point with appropriate clarity.

But God I was loving it. You turn up all aloof and pretending that competitiveness happens to other people, but five minutes in the testosterone seam could be mined with a spoon. It’s so visceral, there’s a lot of skill riding two inches from the next wheel but most of this is how much pain you’re happy to deal with our deal out.

As we found after my bin proximity experience, where my barely sub 40s 500m time had me in the ‘B’ race final chasing four others at a starting distance of 50 metres. I caught three but the last man was being reeled in at a rate suggesting we’d be finished by about next Wednesday.

Steve called us in to save the embarrassment of two middle aged men being rubbish and started the ‘A’ final. Which – to my great amusement – saw Martin being caught on the first lap. ‘I’d rather be joint first in the losers race than last place in yours’said this very non competitive person.

There was more which came as a difficult announcement for my now wobbly legs. A five minute free for all in what I can only describe as a cross between school Murderball and DeathRace 2000. Obviously I chased Martin down, overtook him with a number of choice swear words before getting the hammer down. At which point the slipstreaming bastard sailed past.

Oh fuck. Really. I should just let him go. That’s what my legs wanted. My lungs were keen to add their support but Mr. Brain wasn’t having any of that so we winched our way back before striking on the high banking and burying myself in a dark place for 40 seconds. Steve felt that was about enough. Which was good as by this time I was pretty much incapable of independent movement.

Track racing is an outlier of proper cycling. You will be found out in 30 seconds. The clock doesn’t lie butyou will want to lie down after every hardlap. My advice would be to give it a try – preferably without a hangover sharp enough to shave with – and don’t even pretend you’re not going to be arse-hanging-out competitive.

Will I be going again? Absol-bloody-lutely. Martin was a whole second quicker than me on the 500m sprint. That cannot stand 😉

* as much as I race anything. Competitive in mind only. Still bloody hurt tho.

** the one man behind me was Will who somewhat tactlessly reminded me of an incident a couple of years ago when my lack of road riding etiquette nearly killed all four of us on the A40. I could have done without that to be frank.