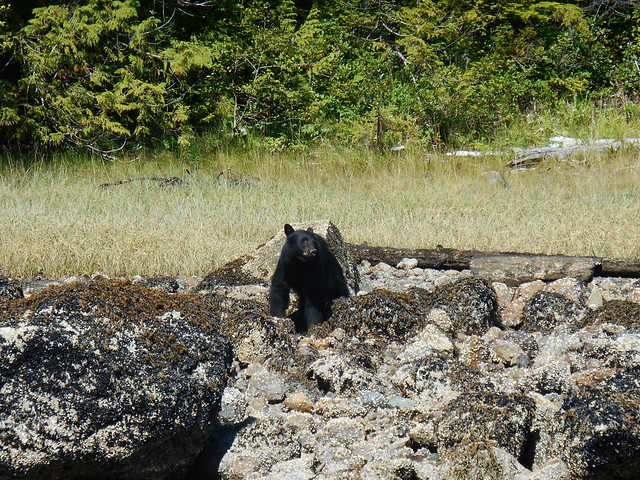 Canada is full of amazing things. Of which 140,000 of them roam pretty much free range in the vast expanses of forest, coastline and the occasional town. We saw exactly four bears, which as a percentage lacks statistical significance, but from a first person perspective was more than enough. With the semantic emphasis firmly on more.

Not this fella. He’s chowing down on a tidal buffet of crab, fresh water fish and anything else washed up under those rocks. We’re separated by 30 meters of open water, and further buttressed from any potential maul-age by the shotgun toting boat skipper.

And the bear isn’t even mildly interested in us. He’s more ‘Two Crabs please, shell on, hold the salad‘ which dovetails nicely with written advice thrust upon any and every visitor to the national park. Dog eared laminated sheets reassure and frighten in around equal amounts. One of my favourites, handed out by a bored looking receptionist, explained ‘if you spot a bear or a fire, there’s a number you can call’ .

“What‘ I enquired in the spirit of pedantry ‘if there’s is a BEAR and it’s ON FIRE?‘. She laughed briefly before assuring us that hardly anyone had been mauled, disfigured, eviscerated or eaten since she’d started her shift some 3 hours before.

Appropriately reassured we headed out to a stunning sand fronted lake framing a perfect view of the Rockies, and sparsely populated by those irritatingly outdoor types javelin launching kayaks and nonchalantly swallow diving into the paddling seat*

Carol and I sat contentedly on the beach ignoring the kids strident pleadings for us to join them in the chilly water. Instead I struck out for a mooch around the local environs – checking out this one-track town, born and abandoned by the railway. A peramble behind the changing rooms put me in sight of the tree line, into which I peered for items of further interest.

And a bear peered right back. Emerging from the undergrowth with an elegance entirely unbefitting to a 300lb quadruped, he paused briefly to check out my threat status. Clearly unintimidated he padded ever closer while my I remained frozen to the spot wondering what was between me and me being eaten.**

Ohshit ohshit oshit it’s time to remember all that laminated advice… what was the first point.. hang on.. yes that’s it ‘The bear is far more scared of you than you are of it‘. Really? Fucking Really? That bear could audition for the part of the Fonz in Happy Days such is his nonchalance, while I’m clearly shitting myself. That’s not helping at all, what’s next?

‘It’s important to identify the type of bear, black bears can climb trees but brown bears do not. However they are better swimmers. It may be helpful to note that some brown bears look black in sunlight‘. No that’s not bloody helpful either. I’m torn between climbing a tree or throwing myself into the lake. Either of which may well be closely followed by a pawful of sharp claws and a snoutful of hungry teeth. Firstly tho I must squint hard at the oncoming bear to ascertain his exact shade. Looks black to me – possible hint of brown, or is that just what’s in my shorts?

Okay, okay don’t panic what’s next? ‘if the bear continues to approach, DO NOT TURN YOUR BACK ON HIM. Wave your arms and make ‘shooing’ sounds‘ Oh PERLEASE.. Hang on there’s more ‘unless it’s a black bear, then don’t make any sounds as he’s likely to take it as an aggressive response and may attack‘

It’s fair to say at this point I was both terrified and confused. Should I sprint for the nearest tree, or dive headlong into a body of water? Would backing away making coo-ing noises be the best cause of action, or maybe a violent waving of every limb in the manner of a man recently electrocuted? Or possibly hedge my bets and distract him with a one man performance of YMCA?

Ignoring advice has served me well in forty seven years so I reverted to type, gave the big fella a stern ‘don’t fuck with me look‘ before turning my back and covering the two hundred metres back to the beach in a time somewhere just under Lightspeed.

I passed Carol – still accelerating – and launched myself into the cold water like a human jet-ski cutting up recreational swimmers in a frenzy of waterborne terror. All while shouting over my shoulder ‘BEAR, BEAR, FUCKING BEAR’. My anti-being-savaged tactics had nothing to do whatsoever with correct identification of the Genus Ursus, but absolutely everything to a brief audit of the many chubby people who were clearly going to be slower swimmers than me.

Eventually I calmed down sufficiently to scuttle back on dry land where our youngest quizzed me on my useless grasp of bear anatomy. ‘Did it have a hump behind it’s neck? If so it’s a black bear‘ / ‘Is it? I didn’t really get much past it’s MASSIVE JAWS AND TEETH to be frank‘ and ‘Was it standing on it’s back legs‘ / ‘Possibly but by that time I was burning up the sand at 900 miles an hour’

The locals on the beach responded to my somewhat high-pitched warning with a rather insouciant shrug and a quietly muttered ‘bloody tourists‘. We never saw that bear again expect in my dreams where I’d sit bolt upright sweating while screaming ‘BEAR, BEAR, BEAR‘. I expect the memory will fade in a few years.

We loved Canada. It’s a brilliant place to visit. And I could ride Mountain Bikes there every day until I die. It’s huge and mostly unspoilt and full of lovely people. But it’s also full of bears. I’m not sure they mention that on the immigration forms.

* there’s a lot of this in Canada. But also a significant ratio of fat blubbers. This surprised me right up to the point when I ordered a rack of ribs. I believe my plate was a concatenation of around four healthy animals.

** a railway line. I remember thinking ‘maybe it’s like vampires not crossing water and those two half metre bits of metal will save me’. At this point I was already reasonably delusional.