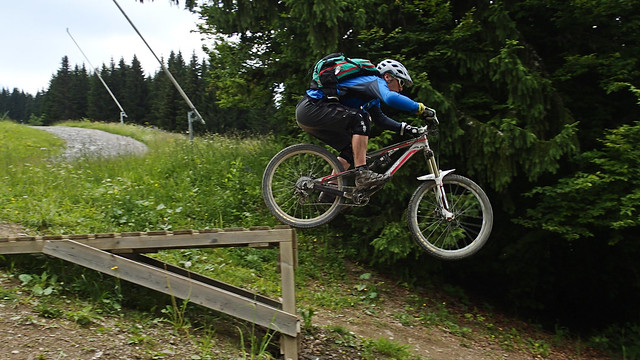 Today brings a real anddefinite need to recalibrate the irony meter. After a week of that ^^ sort of nonsense, I arrived back from the alps with a cemented and enduring love of the mountains, a noticeably 2nd hand mountain bike and – somewhat surprisingly – an entire body full of working limbs not disfigured with scar tissue. Riding the entire gamut of bike parks, walkers paths and unsighted trails on the cliff-edge of oblivion with nary a scratch.

And then today on local trails, I threw myself face first into the dirt off a rock step which conveniently bounced the bike into my shoulder and rib cage from a height best thought of as low earth orbit. An impact that has me taking shallow breaths, avoiding amusing joke punchlines and stabbing the speed-dial for my long suffering physio.

Funny eh? Possibly but I’m not laughing although that’s mostly bruised rib related. Fairly sure I haven’t cracked any as after a single sneeze earlier, I wasn’t immediately whisked into casualty screaming ‘the pain, make the pain go away‘*. Butyeah ride for seven days clocking up 220km and descending 20,000 metres of mind blowing trails with a side order of manslaughter,beforemonging oneself on a bit of singletrack dug out of a familiar forest does feel pretty stupid.

Howeveron a slighter deeper analysis, it’s not quite so simple. Start with this; the alps are big, steep and scary – from where you can draw a straight line to crashing which is equally big, probably for keeps and definitely scary. So the imaginative, fragile and often broken ring fence a safety zone around difficult obstacles by riding at 80% of what passes for flat out. This may feel like cowardice or excuses and it could well be either or both. But I’ll take a little angst and a larger gap to the fast riders if it means riding the next day.

Whereas my local trails are slightly less scary, significantly more familiar and ridden sufficiently often to forgo that safety net. Except when it’s a brand new sculpted earth snaking through a dank forest environment. Caused by some rain while I’ve been away which partially excuses my inability to ride the first rocky obstacle on sight. A second successful attempt reminded me that commitment matters as much here as it does in the big mountains, and much as I like my 29er it’s nowhere near as focussed as the Mega on the scary stuff. Which means I needed to be.

I wasn’t. A rock step which can either be launched or rolled slid into my narrowing vision at about the same time as the previous rider let out a slightly startled ‘wahhhhaaaah‘ as he successfully dropped off the other side. Well it’s ridable then. It might well be launch-able. But even with a week of alpine silliness, there’s a big difference between blind optimism and blind takeoffs. Roll it then. Roll it I did. Land it I didn’t.

“The line is to the left” was the helpful comment delivered some five seconds after it would potentially made a difference. The line to the right finished in a deep hole – partially filled with stagnant mud and apparently infinite depth. I finished in the same place having collected the spiky bits of the bike in the left hand side of my ribcage while a handy rock dealty my shoulder a bloody parcel of impact trauma.

Sat there for a while wondering when breathing might become a little less painful. Cursed myself for both a) a lack of commitment and b) a lack of sanity for attempting it in the first place which is essentially debating both ends of an argument with yourself. Possibly fell on my head 😉

Rest of the ride was fine. The previous couple of hours were great as well. Transformed my riding world from being a bit grumpy on account of a serious lack of proper mountains and chairlifts to just being contentrolling on mostly dry trails with the prospect of beer in the sunshine. Nurafen for the soul.

I expect tomorrow there will be some wincing, definitely some whinging, a whole load of ‘no honestly it was <——————–> big‘ hand gestures and perhaps a quiet moment wondering if it’s time to find out if DIY hammering your thumb is less painful than throwing oneself repeatedly to the ground. That’ll be a pretty short internal discussion and come Wednesday my focus will be on a mountain bike trail somewhere close.

My day job is all terribly rationale and logical. Evidential based decisions, carefully nuanced and packaged for the widest audience. That I can do with bruised ribs and a hurty shoulder. But it’s not real life is it?

* If you’ve ever cracked or broken one or more ribs, that’s pretty much your life for eight weeks.