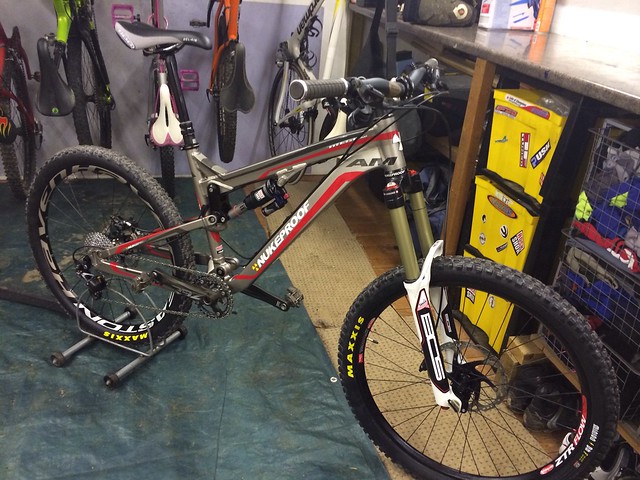 Until about 1:53pm this afternoon, a post was in the virtual exit tube awaiting prose peristalsis to push it into my socially connected world. Where almost no one would read it. Which was a shame as much thought had been expended over the last two weeks in an attempt to make daily flooding mildly amusing. Tales of sleet laden trudges over high Welsh mountains jostled, with similar epic death marches through a Flanders-themed Forest. All linked by motivational reserve eroded by endless rain.

And if that wasn’t enough I’d worked in the term ‘arboreal‘ quite a number of times interspersed with a bucket load of moist similes, all finished with a mildly pretentious polemic on political blindness in a dying world. There’s a feeling here that maybe the read wasn’t as interesting in the write but no matter, it’s all raging water under crumbling bridges now.

That’s when a maelstrom of want, guilt, delusion and displacement created a perfect storm marked ‘Confirm Order‘. Notice words such as ‘logic‘, ‘reason‘, ‘rationale‘ and ‘permission‘ are pointedly missing adjectives from the previous sentence. Notice also that the newest entrant into the Shed Of Dreams has the meme of something not long ejected on the grounds of misalignment due to my now firm bicycle requirements.

In my defence it was cheap. There are definitely additional strong and sound arguments on to exactly why I bought it. I just don’t have them to hand right now. Essentially I’ve aquired a relic of an unloved wheel size that I won’t use 90% of the time, and when I do it’s going to be an experience starting with ‘why is that front wheel so small and why is it so far away?‘

We’ve been here before. Many times. I’m a buying windsock when breathed on by the zephyrs of marketing and perceived betterness. So I hated to see the Rocket sat unloved in a corner of the shed, shunted behind a brace of 29ers that rocked my UK riding world. Which made selling it pretty easy especially as the speed and bravery needed to bring it to life were pretty much beyond me.

Roll forward six months. In four more we’ll be back in the Alps riding* stuff like the Swiss Downhill Course** in betwixt chairlift winching and plummeting down more handy mountains. And now I have a bike almost the same as the one recently discarded to ride it on. Only it’s worse than even that. Whereas the Rocket was a superbly engineered, hand crafted frame from a Cy’s much respected emporium, the Mega up there appears be the bastard love child of a amp-crazed welder abandoned in a dark room with a handful of aluminium lintels.

Pretty it isn’t. Whereas the Rocket was all composite curves and almost OCD attention to detail, the Mega has the look of something brought to life by a million volts and the frightened cry of ‘The Monster is Alive‘. When the delivery van arrives, I expect it to punch through the rear door, bludgeon the innocent driver to death before smashing into the house, eating a family pet then presenting itself at my feet – possibly on fire – demanding whether I’m man enough to do anything other than quiver in its presence.

I think we can all agree the answer to that is a firm no. And then we have to build it. First tho I have to lift it which might be a job for at me and a couple of friends. It appears the FEA analysis was junked for ‘screw it, do those girders come in a bigger size‘. Once I’ve added stuff to make it go forward, up and down and hopefully stop, it’s going to weigh about the same as me. Still since most of its life will be spent on an uplift truck or a chairlift, this is unlikely to be a problem. And I’ve become pretty accomplished at pushing if not.

Let’s get the questions out of the way shall we. An FAQ prepared by the deranged if you will:

Will it be better than the Rocket? Of course not.Will it cost as much to build? Absolutely not*** Will those 26 inch wheels hold me back? It’s me we’re talking about, of course not. How much riding in the UK will it get? Exactly as much time as when there’s a bike trailer, some terrifying trails and sufficient armour to play a major part in a medieval battle. Aren’t I a bit old for this kind of thing? I dunno, if with great age comes great responsibility and great wisdom, then clearly bloody not.

So it turns up later this week. And through a process of eBay osmosis shall I restock my 26inch spares box before hanging it all off the monster. Yes, this is exactly the same stuff I sold not so long ago declaring ‘Pah 26inch bikes, who’d have one of those, talk about old technology‘. And once built, we’ll be off to Bike Park Wales where I expect any acts of cavalier bravery shall be more horse than rider. Get through that unscathed and then it’s all about surviving a long week in the Alps. Might happen.

Still no point dying wondering eh. Rationale and Logic are over-rated. Idiocy and Delusion is where it’s at in 2014.

* or in my case mincing. Having the Rocket last year in no way imbued downhill skills which in no way should invalidate buying another bike to do pretty much the same on.

** which I’ve subsequently discovered my mate Dan rode on a hardtail. Best to gloss over that for now I think.

*** Because I shall be long in the second hand market. As promised to Carol who took about 2 seconds to deconstruct my arguments for new shiny thing ownership before explaining to the children, that yes she had married an idiot.