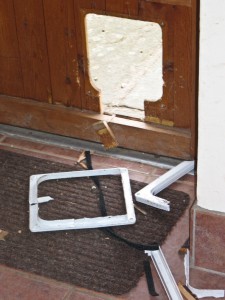 Would now like the world to know, they are now to be referred to as “Dog Flap“

When Murphy was little*, a favourite trick was to follow you outside by somehow squirming through the cat flap. This was particularly traumatic for the cat, especially if it was trying to come back in at the same time.

Yesterday, the dog was clearly feeling some “separation anxiety” as Carol had a few other things on here mind, and four mad chickens in her hand. Ironically one of the other ‘things’ was a spotty Random who is the last member of the family to get Chicken Pox.

Murphy decided that since he can no longer fit through the cat flap, he shall merely extend it by shoving his every increasing girth hard against it, until the door broke. Apparently, on escaping, he was delighted with himself and couldn’t wait to run over to Carol wagging his tail and giving it the full “You see I’m not totally stupid” expression.

Dog was marched back to doghouse, and locked in his cage. When I finally got home he exchanged his expression for “I was just sticking my snozzle out, and it broke. Honestly“.

* It’s all relative. He was never exactly small, but now he is a Labrafantasorous.